Is coffee good for weight loss? 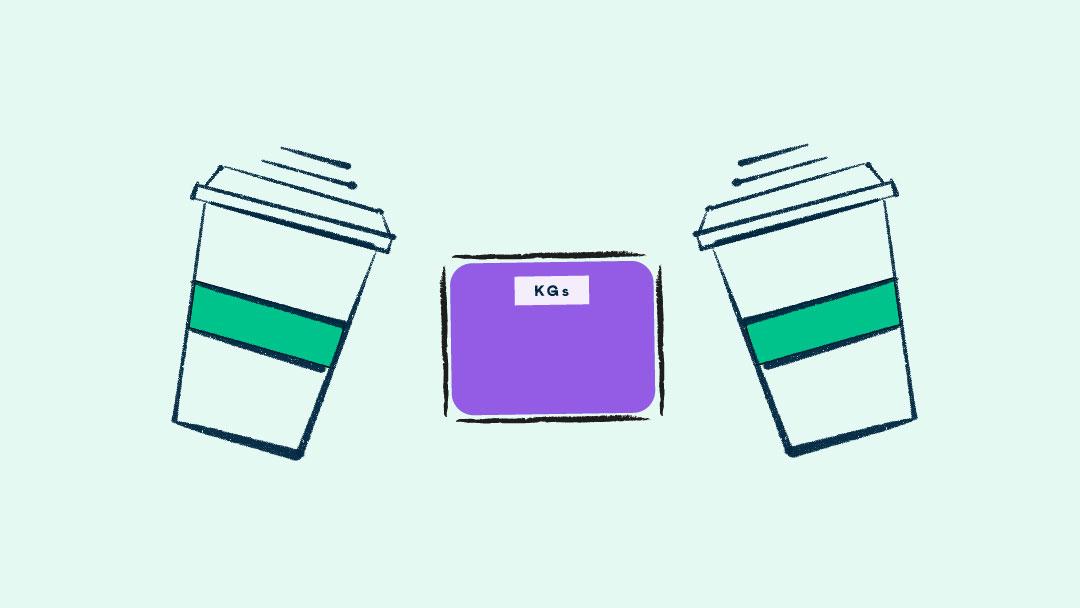 Coffee is one of the world’s most popular beverages for getting the day started.

Many of us struggle to feel awake and alert in the mornings before we’ve had a coffee.

Beyond making us feel more alert, there’s a popular belief that coffee has health benefits that are linked to weight loss. The media often talk about coffee’s ‘fat-burning’ properties, with claims that it reduces appetite and speeds up our metabolism.

This guide will evaluate whether or not the idea that coffee promotes weight loss is supported by strong evidence.

How does coffee work?

Coffee is a drink brewed from the seeds of the coffee plant. There are over 80 different species of coffee trees in the world.

The most studied substance found in coffee is caffeine. Caffeine has the same structure whether it’s in coffee, tea, or energy drinks. It’s the ingredient responsible for making us feel more alert.

It does this by directly blocking a chemical in our brain (a neurotransmitter) called adenosine. Adenosine makes us feel drowsy, so when it’s blocked we feel more alert and awake.

Those of us who consume caffeine every day may become tolerant to most of its effects. Those dependent on coffee need it to reach the same level of alertness than those who aren’t dependent on coffee. There’s no long-term benefit, in terms of feeling alert and awake, to drinking coffee each morning.

Overall, the research on coffee and weight loss is inconsistent and there are many different ways that it’s been measured. Plus, some research focuses on specific components of coffee, such as caffeine, rather than the drink as a whole, which makes it difficult to compare studies.

Coffee and our metabolism

Focusing on caffeine specifically, a review of randomised controlled trials found that caffeine intake was linked to lower body weight, BMI, and body fat. Some scientists argue that these effects on weight are due to caffeine increasing our metabolism or RMR.

Our resting metabolic rate (RMR) is the rate at which we burn energy when we’re doing nothing. Thinking, breathing, and other basic processes all require some energy, and this is our RMR.

One study looked at the impact of caffeine on BAT. A dose of 65 mg of caffeine (roughly the equivalent to a weak cup of coffee) was found to stimulate fat browning, both in test-tube studies and in nine human participants. Whilst promising, the number of participants in this study is too small to draw firm conclusions.

It’s also worth noting that although the results from the review above demonstrate significantly more weight loss in caffeine groups compared with controls, the average weight loss of the caffeine group was <2kg across four weeks. This suggests that if caffeine does promote weight loss, it’s a minimal effect.

Plus, the studies mentioned are all short-term. As regular coffee drinkers become tolerant to many of its effects, it’s possible that this extends to any potential effects coffee has on our metabolism. This means that although a short-term dose of caffeine may temporarily speed up our metabolism (and potentially contribute to short-term weight loss), this effect might not be maintained in the long term.

Sleep is one of the most important factors that can impact our weight. Poor sleep can increase our cravings, influence our food choices, and reduce the amount of energy we use up.

As we’ve discussed, coffee acts as a stimulant and makes us feel more alert and awake, due to the caffeine. The impact of coffee on our sleep will depend on how we individually process it, how much we have, and how close to bedtime we drink it.

However, we also know that caffeine has a half-life of six hours for the average adult. This means that it takes about six hours for your body to process and get rid of half the caffeine in your system.

So, if you drink a coffee at midday, approximately half of the caffeine will still be in your system at 6 pm, and a quarter at midnight. It’s believed that the caffeine from one coffee could take somewhere between 24 and 36 hours to leave your body entirely.

This residual caffeine in your system can interfere with your sleep – though you may not be aware of it if you’re used to having it. It’s also important to note that while many people can still fall asleep with caffeine in their system, it will make the quality of sleep more shallow and impact on deep sleep.

Plus, some of us might experience anxiety after drinking caffeinated drinks, which can negatively impact our sleep.

Coffee and our appetite

The evidence available around coffee and appetite or food intake is limited as it’s a new, emerging area of research.

However, there were only twelve participants in this study. Larger studies with more participants are needed to make sure that the results represent a larger number of people and aren’t skewed by individual differences. 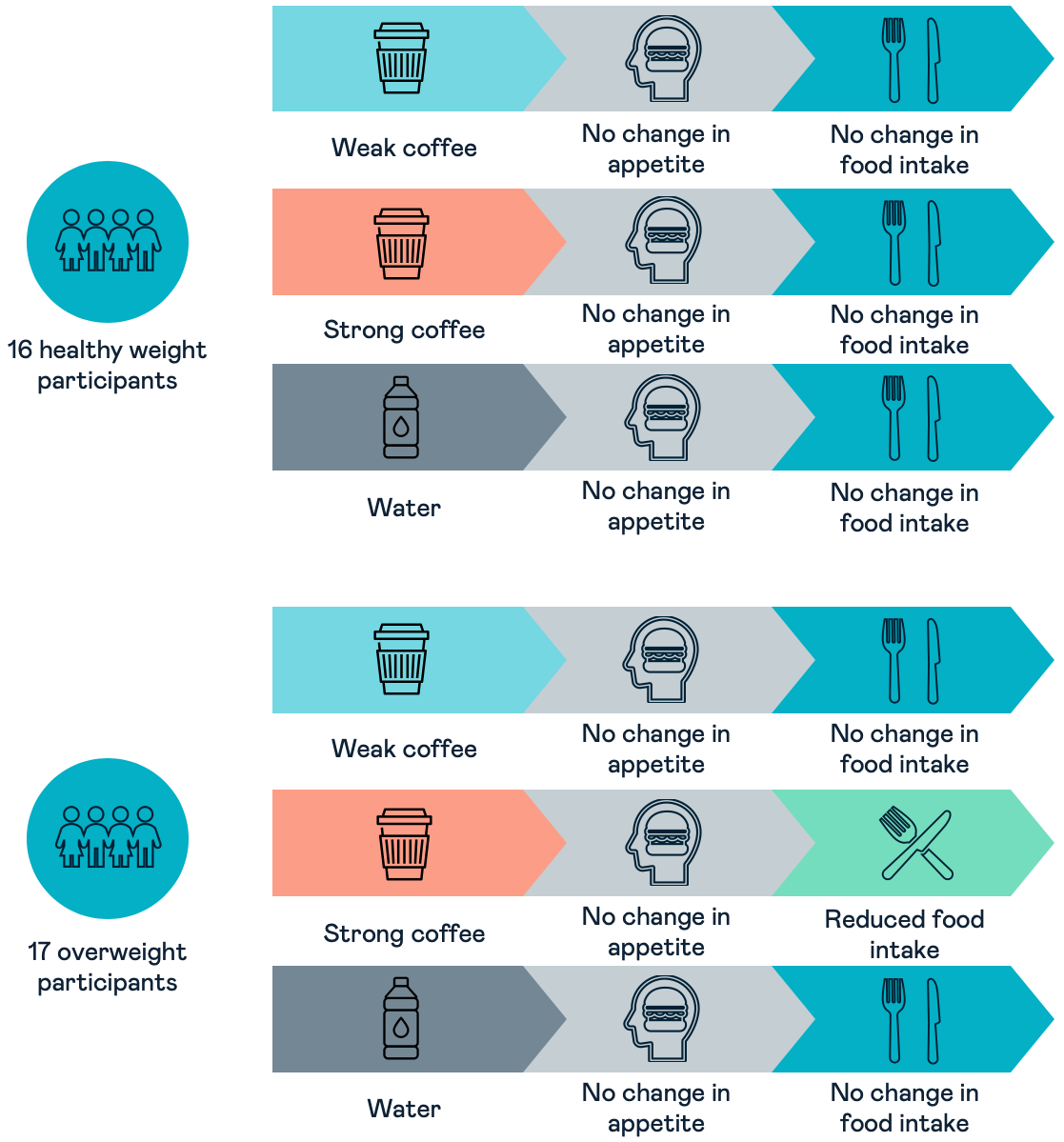 Evidence suggests that relatively high doses of caffeine increase our physical performance during exercise. However, this effect was only seen in people who don’t regularly consume caffeine.

On top of this, a well-designed but small study explored the effect of a caffeine and polyphenol supplement on participants’ metabolism and fat burning ability after sprinting exercises, as well as their physical performance.

Results showed that when individuals received the caffeine and polyphenol supplement, they burned more fat and used up more energy after the sprinting exercises. There was no significant difference in the physical performance of the sprinting exercises, suggesting that there may be an effect of weight loss independent of any change in physical performance.

As this study combined caffeine and polyphenols, it’s difficult to know which substance was responsible for the effect, or if it was the combination, as you would find in a cup of coffee.

So should I drink coffee for weight loss?

Overall, the available evidence doesn’t suggest that drinking coffee would lead to notable weight loss. Many of the studies have a very small sample size, and as everyone processes caffeine differently, this makes it challenging to make any firm conclusions.

Plus, the majority of research focuses on short-term effects. So, even if coffee, or the caffeine in coffee, does impact our weight in the short-term, there’s little evidence suggesting that this effect would last in the long term, especially once we become tolerant to the effects of caffeine.

A proven effect of coffee is the impact on our sleep, and that’s probably the most important factor when deciding how much coffee to drink and when.

Whether or not you drink coffee is down to personal choice, but if you do drink it then aim to have no more than 1-2 cups before lunchtime. This will reduce the negative impact on the quality of your sleep. Good quality sleep is extremely important for weight management.

On top of this, it’s important to distinguish between black coffee and sweetened coffee beverages. Having a dash of milk with your coffee is completely fine, however, adding sugar, flavoured milks, or drinking a sweetened coffee drink (such as frappuccinos or flavoured lattes) can lead to weight gain as they’re usually high in added sugar.

It’s also best to avoid adding artificial sweeteners to our coffee. Whilst most sweeteners don’t provide sugar, they reinforce the sweet taste, which could lead to sweet cravings. They may also have a stimulating effect on our appetite, which can leave us feeling hungry and unsatisfied.

How much coffee is too much?

We all respond uniquely to coffee, and some individuals may be able to drink more than others without displaying any negative side effects.

The European Food Safety Authority suggests that up to 400 mg of caffeine a day (roughly equivalent to 4-5 cups of coffee) is safe for most people. This means most healthy individuals could consume this much without seeing side effects, but some people’s upper limit may be lower or higher.

If caffeine makes you feel jittery and anxious or interferes with your sleep, then reduce the quantity consumed or consider switching to decaf.