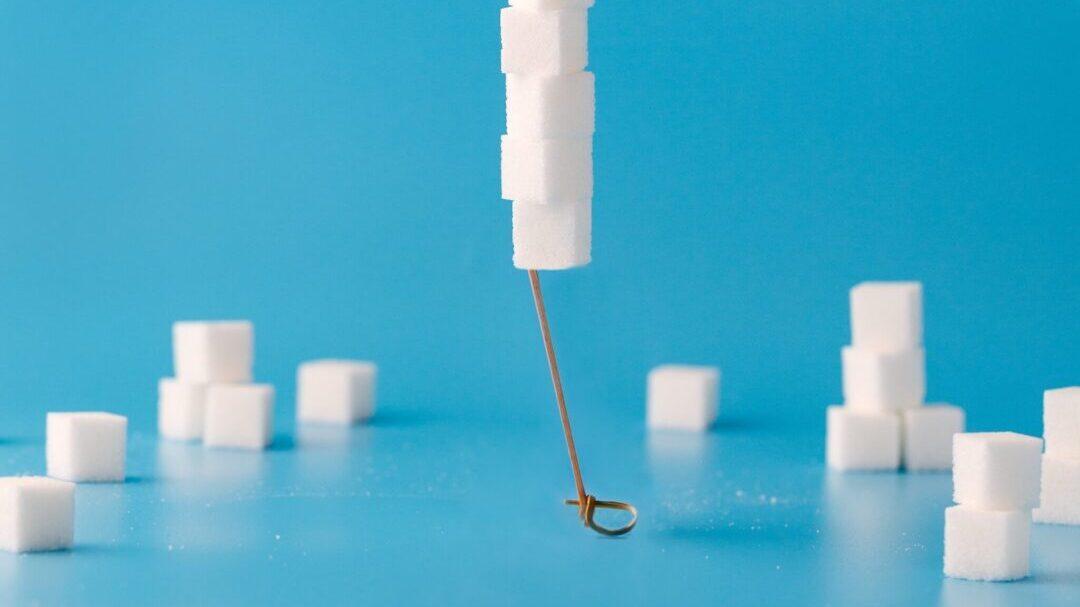 The link between obesity and chronic diseases such as type 2 diabetes and heart disease is well established. More recently, researchers have also started looking into the impact of excess body fat and poor blood sugar control on our immunity and the body’s ability to fight infections.

The covid-19 pandemic sparked further interest in this complex relationship, with research showing that individuals living with obesity and type 2 diabetes were more at risk of severe complications of covid-19.

Obesity and type 2 diabetes appear to impact our immunity in three crucial ways:

At Second Nature, we’ve supported over 150,000 people to lose weight and lower their blood sugar levels.

If you’d like to improve your immunity, lose weight, and manage your blood sugar levels for the long term, click here to take our health quiz.

Otherwise, keep reading as we dive deeper into how our immune system works and how it’s affected by obesity and type 2 diabetes.

1) How our immune system works

To understand how our immune system works (the study of immunity is called immunology), it’s essential to first understand inflammation.

Inflammation is our body’s response to damage. It’s an essential part of the healing process that enables our body to recover from injury, infection, and illness that cause damage to our tissues and cells. This response leads to swelling after an injury, for example.

However, if damage doesn’t occur in the first place, the body’s inflammatory response wouldn’t need to be triggered at such a high level.

The link between disease and inflammation is more likely to be a sign of excess damage. With excess damage to the body’s tissues and cells comes an exaggerated healing response in the form of inflammation. This is known as chronic low-grade inflammation.

The immune system comprises a collection of organs, chemicals, and cells that play a role in the body’s inflammatory response.

While some are well known, like the involvement of white blood cells, others might not be as obvious, such as the role our tonsils play in stopping germs from entering the body through the nose and throat.

The primary responsibility of our immune system is to detect foreign pathogens or viruses within the body – like a strand of the influenza virus which causes the seasonal flu – and attack them to prevent damage to the body.

White blood cells are your body’s defence against these foreign invaders. Our white blood cells are made up of a range of different cells which each play a specific role in the immune response, such as B-cells, T-cells (which work with antibodies), and natural killer cells.

Remarkably, your body records every microbe it’s ever defeated through the action of a special kind of white blood cell known as (unsurprisingly) ‘memory cells’. These memory cells enable our immune system to recognise microbes in the future and quickly attack them to prevent damage.

This process is how many vaccinations work. The vaccine triggers our immune response by injecting a minimal amount of a virus into the body. Our memory cells then record this so they can attack the microbe faster in the future if it enters the body again. 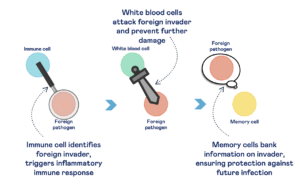 2) How obesity impacts the immune system

The size of our fat cells determines how well they function. If a fat cell grows too large, it becomes dysfunctional and produces excess secretion of proteins (known as cytokines), which prevents our white blood cells from working properly. Smaller fat cells don’t seem to have the same negative impact. 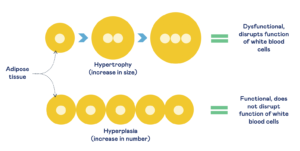 Adipose tissue inflammation due to the number of large dysfunctional fat cells is common in obesity compared to leaner individuals.

While lean people can also experience more large fat cells, leading to the same disruptions to their immune system, it’s not as common.

One of the substances released by our fat cells is leptin. Leptin is produced by fat cells and has been described as our satiety hormone as it helps to regulate hunger and fullness.

Technically, leptin signals to the brain how much fat (lipids) we have stored in our body, which helps the brain know how much stored energy we have, which can trigger either hunger or fullness signals.

However, leptin also seems to have a role in supporting the function and production of certain types of white blood cells, particularly T-cells. T-cells and other immune cells have leptin receptors attached to them so they can communicate with each other.

When the amount of stored fat increases, adipose tissue secretes more and more leptin. This leads to a scenario known as leptin resistance, where the cells in the body don’t respond as well to leptin as they used to, resulting in a decrease in function.

Research in mice and humans has found that in obesity, when an individual becomes leptin resistant, it reduces T-cell function and increases the likelihood of infections and disease. Leptin seems to be a mediator in our immune system

You could consider leptin a bit like the oil to your car’s engine; with the right amount, it supports the engine to stay healthy and function well, but too much or too little disrupts the system and can lead to a breakdown. 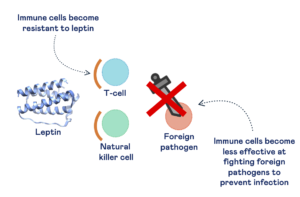 Type 2 diabetes is a condition where the body struggles to manage the energy we get from food effectively, we develop insulin resistance, excess fat builds up in the liver and pancreas, and our blood sugar levels rise over time.

Although it’s heavily linked to obesity, people at any weight can develop type 2 diabetes if they develop insulin resistance and metabolic syndrome.

While many issues associated with type 2 diabetes can impact our immunity, there seem to be two issues directly linked to the high blood sugar levels seen in people living with type 2.

Firstly, excess glucose (sugar) in the bloodstream appears to promote the release of proinflammatory cytokines that stop our immune cells from functioning correctly.

This is similar to the mechanism we discussed in obesity, where enlarged fat cells release too many of these cytokines.

Secondly, it seems that the high sugar levels in the bloodstream suppress an essential part of the immune response, a complicated biological process known as ‘phagocytosis’ (pronounced ‘fago-si-toe-sis’).

Phagocytosis is a bit like the game Pacman. It’s one of the final stages of the immune response where our immune cells will engulf their enemies, break down their parts, and remove their remains from the system. 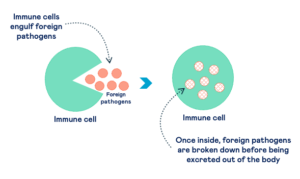 Our body’s immune response is a complex system comprised of multiple organs, chemicals, and cells initiated by inflammation – our body’s response to cell and tissue damage.

Our immune response is designed for hunting down foreign pathogens, bacteria, or microbes that have the potential to cause infections and disease and ‘destroy’ them.

How well our immune system functions are influenced by the amount of fat stored in our body, particularly how many large (hypertrophic) fat cells we have.

Insulin and the personal fat threshold