Are artificial sweeteners bad for you?

We’re often told that we should limit our intake of sugary foods to maintain good health and lose weight. This has led to a surge in popularity for artificial sweeteners (also known as sugar substitutes).

What are artificial sweeteners?

Artificial sweeteners are chemicals that are added to food and drink products to sweeten them. They are lower in calories compared with natural sugars like sucrose (table sugar) and fructose (fruit sugar) which, if eaten in excess, can lead to weight gain, increased risk of type 2 diabetes, and heart disease.

Artificial sweeteners provide the sweet taste but without the calories or an accompanying rise in blood sugar levels. Therefore, they are often popular with people who are trying to reduce their sugar intake, lose weight, or manage their blood sugar levels. 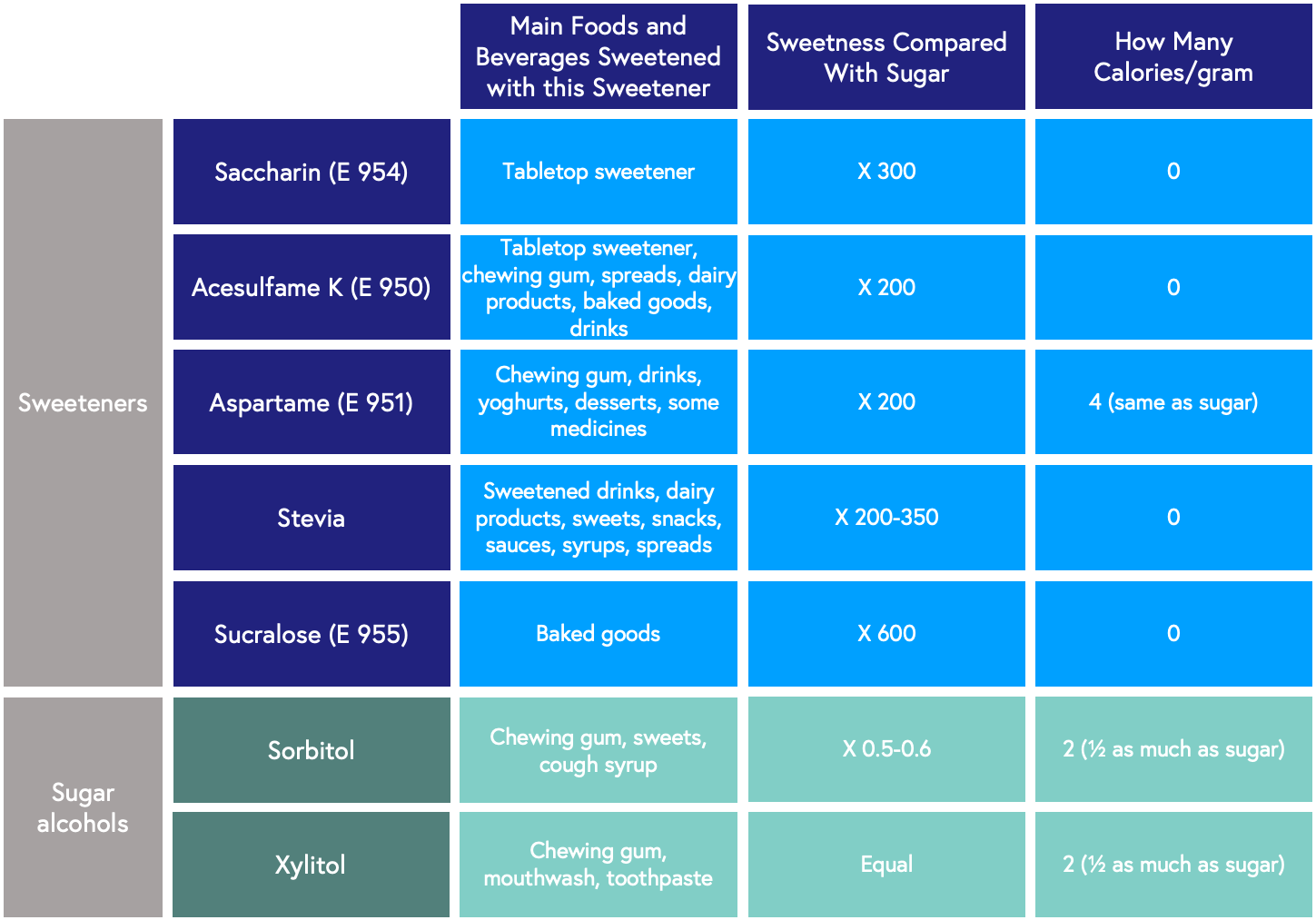 Concerns about the safety of artificial sweeteners stem from the 1970s. Several animal studies found that when rodents were fed large doses of saccharin, over time, they developed bladder cancer. The researchers concluded that saccharin causes cancer in rodents and went on to say that it’s likely to cause cancer in humans too.

Additionally, rat studies have suggested that artificial sweeteners may have a negative effect on the balance of gut bacteria. However, research suggests that we can’t use animal models to predict how humans will respond to certain chemicals.

The amounts of artificial sweeteners used in the rodent studies are much higher than the amounts that humans would typically eat or drink. What’s more, there are major differences in how humans metabolise saccharin and develop cancer compared with rodents. This means that we can’t translate these findings to human health.

What does the latest science say?

As mentioned above, animal studies have suggested that high levels of saccharin in mice could be linked to an increased risk of bladder cancer. However, animal data can’t determine that artificial sweeteners would have the same effect on humans.

More recently, the relationship between artificial sweeteners and cancer in humans has been thoroughly investigated. The researchers either found no association between saccharin and cancer or the studies were inconclusive.

A large epidemiological study (a type of observational study that investigates the distribution, patterns, and causes of diseases in populations) of nearly half a million adults found that saccharin isn’t associated with the number of bladder cancer diagnoses each year.

Smaller case-controlled studies (a type of observational study) have also found no significant association between cancer and artificial sweeteners. These studies are largely retrospective, which means they look backwards to see if there is a link between artificial sweetener use in people who already have cancer. However, there are limitations to this kind of study such as ‘recall bias’, where individuals may not be able to accurately recall how much sweetener they consumed.

Higher-quality systematic reviews, which included human clinical studies, have also failed to find a link between cancer risk and artificial sweetener use.

Our intestinal microbiota (gut bacteria) plays an important role in health. In 2014, research in rats suggested that artificial sweeteners may have a negative effect on our gut bacteria. However, as we’ve mentioned above, we can’t translate findings from animal studies to humans.

Most artificial sweeteners aren’t broken down in the gut. This means that they, in theory, shouldn’t affect gut bacteria. Stevia, sorbitol, and xylitol, however, are broken down in the gut. Small human trials have shown that xylitol and stevia, but not sorbitol, may affect the gut bacteria. However, larger high-quality human trials are needed before we can draw conclusions.

Concerns about artificial sweeteners and weight gain originate from observational and population studies.

For example, a review of nine observational studies found that artificial sweeteners were associated with a raised body mass index (BMI). However, higher–quality studies have shown that there is very little evidence that using artificial sweeteners, instead of sugar, leads to weight gain.

Whilst most sweeteners don’t provide any calories, they reinforce the sweet taste. Sweeteners can be up to 500 times sweeter than table sugar, which puts the sugar receptors on our tongue into overdrive. Research is conflicting, although some studies have found that they may also have a stimulating effect on our appetite, which can leave us feeling hungry and unsatisfied. This could lead to sweet cravings, which may offset weight loss or health benefits, although more research is required.

Over time, frequent use may lower our tolerance for more complex tastes. Simply put, people who routinely use sweeteners may start to find that naturally sweet food, such as fruit, and unsweet foods, such as vegetables, becomes less appealing.

The safe level is called the Acceptable Daily Intake (ADI). The ADI for an artificial sweetener is the amount that people can consume daily during their whole life without any appreciable risk to health. The ADIs for artificial sweeteners have been set at levels that are much higher than people would normally eat. For example, a 65 kg person could safely consume 2600 mg of aspartame per day, which is equivalent to 14 cans of Diet Coke™.
ADIs for several common artificial sweeteners: 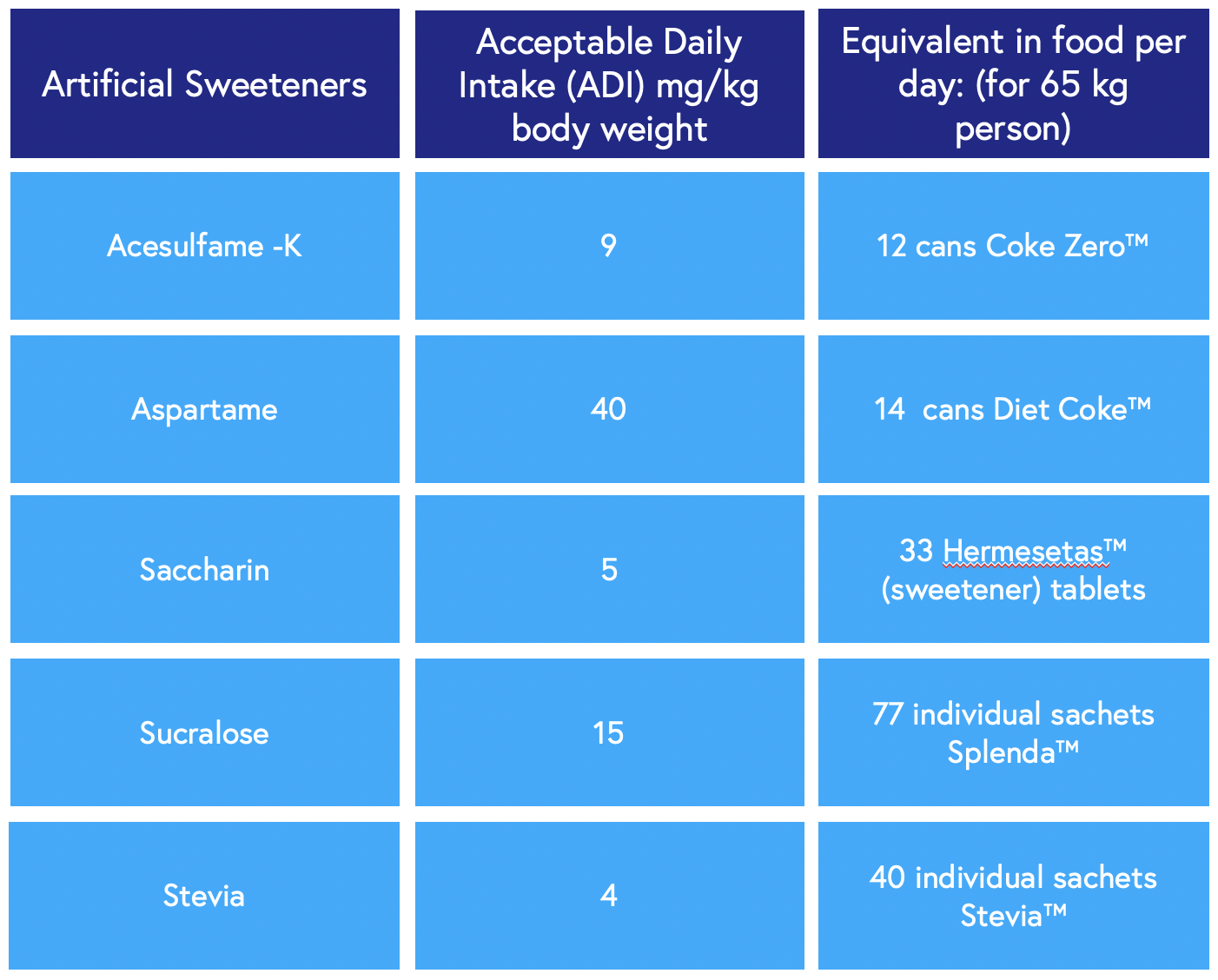 The DASH diet: All you need to know

The Mediterranean diet: All you need to know