Did you brush your teeth this morning? Lock the front door behind you? Make a coffee as soon as you arrived at work? Without realising it, we engage in a huge number of automatic behaviours and actions every day.

These automatic behaviours are called habits. One paper published by Duke University demonstrated that more than 40% of the actions we perform each day are automatic habits rather than conscious decisions.

So, if we spend so much time carrying out automatic habits, what can we do to break bad or unhealthy habits? This guide explains how to break bad habits and make new, better habits that are automatic in our daily life.

Performing an automatic habit is a three-step process that happens time and time again, forming a loop.

Charles Duhigg, an award-winning journalist and author, described the habit loop in detail in his book ‘The Power of Habit’. 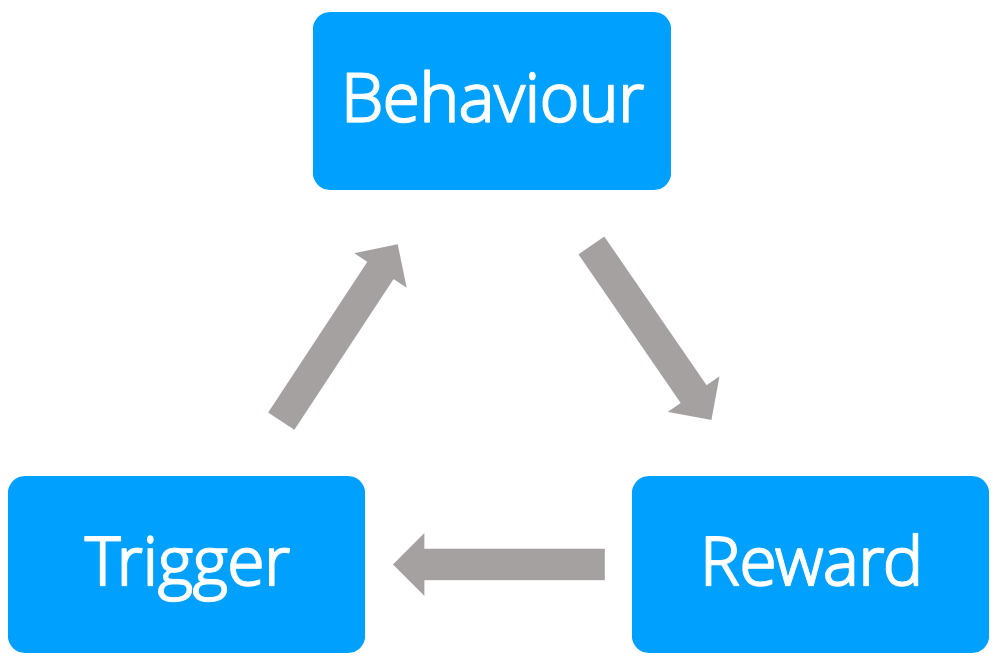 In this loop, the first step is the ‘trigger’, which acts as a cue and tells our brain to go into automatic mode. Then there is the ‘behaviour’, which can be a physical, mental, or emotional response to the trigger. The last step in the habit loop is the ‘reward’, that signals to our brain whether or not it’s worth remembering this habit loop to use in the future. When our brain remembers a habit loop, and it’s performed over and over again, it becomes more automatic.

To illustrate how the habit loop works in daily life, let’s look at the example of overeating junk food in the afternoon. Many people report wanting to snack around 3/4pm every day. In this case, the time of day is the trigger. Following this trigger, the behaviour might be going to get a biscuit from the kitchen. The reward that follows could be reduced hunger, satisfied sweet cravings, or merely a brief break from your work. 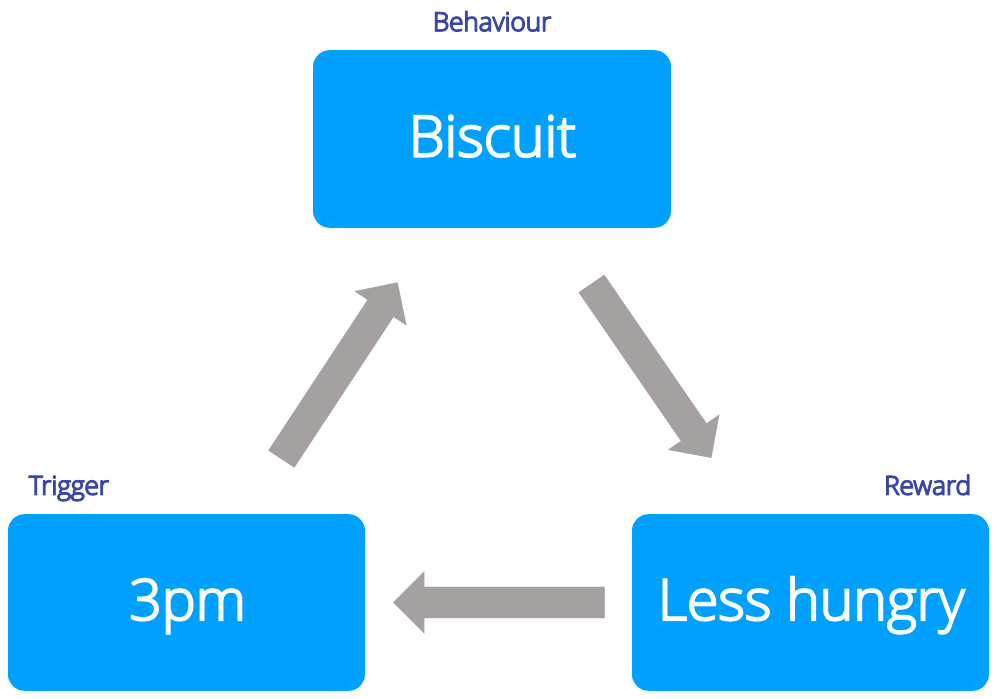 How does the habit loop work?

In a review of how habits work, an animal study done by MIT researchers was noted. This study looked at the brain activity of rats as they developed new habits.

The rats were placed into a maze with chocolate hidden at one end and were repeatedly released to find the chocolate, which was in the same place each time. The rats appeared to be leisurely sniffing and scratching their way around the maze until they found the chocolate.

Interestingly, the rats’ brain activity was very high during the first few times they were released into the maze. One area of the brain, in particular, called the basal ganglia, was frantically processing all the new information.

Then, as the rats become more and more familiar with the maze, their total brain activity decreased. The basal ganglia, however, had stored information about habits and was still activated even when the rest of the brain switched off.

Similar findings have been seen in humans. ‘The Power of Habit’ book explored the research of Professor Squire, on an individual named E.P, who had severe brain damage. E.P seemed able to learn new behaviours and form habits but could not recall how he was doing them or even remember what they were. Squire noted that the basal ganglia region in E.P’s brain was intact, even though other areas suffered damage.

The research in rats and humans combined suggests that the basal ganglia brain area is responsible for forming new habits and making this behaviour automatic.

How do we change our habits?

So now we know how habits work, let’s discuss how to break bad habits or introduce new good habits. It’s worth noting that if we try to change all our bad habits at once, it’s unlikely to stick and we might be left feeling more guilty and unsuccessful than we were to begin with. It’s much better to approach one habit at a time and work on it for a while and then move on to another.

The key to breaking a bad habit is to firstly identify what reward we might be looking for when we respond to a trigger.

Taking our earlier example of afternoon snacking, is it that you’re feeling hungry or is it that you need a distraction and break from your desk?

Once we have identified what reward drives us to act on a trigger, we can better understand how to change our behaviour.

If the reward you’re seeking is reducing hunger, and you want to reduce the number of biscuits you’re eating, try keeping some healthy snacks at work. Examples include a handful of unsalted mixed nuts, carrot sticks and hummus, a boiled egg, or natural greek yoghurt with berries. Then, when it approaches 3pm and you feel hungry, go to the kitchen as normal but just have a healthy snack instead of a biscuit.

If the reward you’re seeking is a distraction from your work, consider other ways to enjoy a break. You could have a quick chat with a colleague, go outside and walk around the block once, or make a herbal tea.

Once we have identified what reward we’re looking for and put an alternative behaviour in place, the last step is to practise. Repeating the new habit loop over and over again will eventually lead to this behaviour requiring less willpower and becoming automatic.

How long does it take to form new habits?

Although changing our habits is a simple process, it’s not easy to resist automatic behaviours we already have. Laying down new habits takes time and practice. When we were children, we didn’t suddenly remember to brush our teeth every morning and evening. It took prompting and repetition.

You may have heard the common myth that it takes 21 days to form a new habit. In reality, the number of repetitions it takes for a new habit to form can vary greatly from person to person, and will also change depending on the type of habit we’re trying to create.

For example, a simple habit like drinking eight glasses of water per day may only take 20 days to form. A more complex task, such as going to the gym for three workout sessions a week, can take up to 250 days.

For this reason, it’s really important to have realistic expectations of ourselves and the time it’ll take for these new behaviours to become automatic. Don’t give up if you don’t grasp them straight away, or if you have a slip up along the way. Habits are a process rather than an event.

If you decide to commit to changing some habits, you’ll notice that these new habits become progressively easier over time. This means that we only need to maintain our motivation to continue this new behaviour until the habit is formed. After that, our new habits become second nature, and we won’t think twice about doing them. This is the key to breaking bad habits.

Are you scared of losing weight?

Dieting: Why it doesn’t work

I. Am not drink a cup of tea, without a biscuit. I know I can stop the habit, I quit smoking and drinking alcohol, as I believe they were bad for me. However the biscuit thing is the sweet thing I crave constantly. I will try the 5 day plan and hopefully kick the habit.

I found the webpage very useful.

Brilliant article. Very helpful. I am going to put it into action. When I get stressed I head for biscuits, chocolate anything really. So going to be conscious to distract myself each time I get the urge to eat. Speak to someone or even have a glass of water