Does insulin resistance cause weight gain? 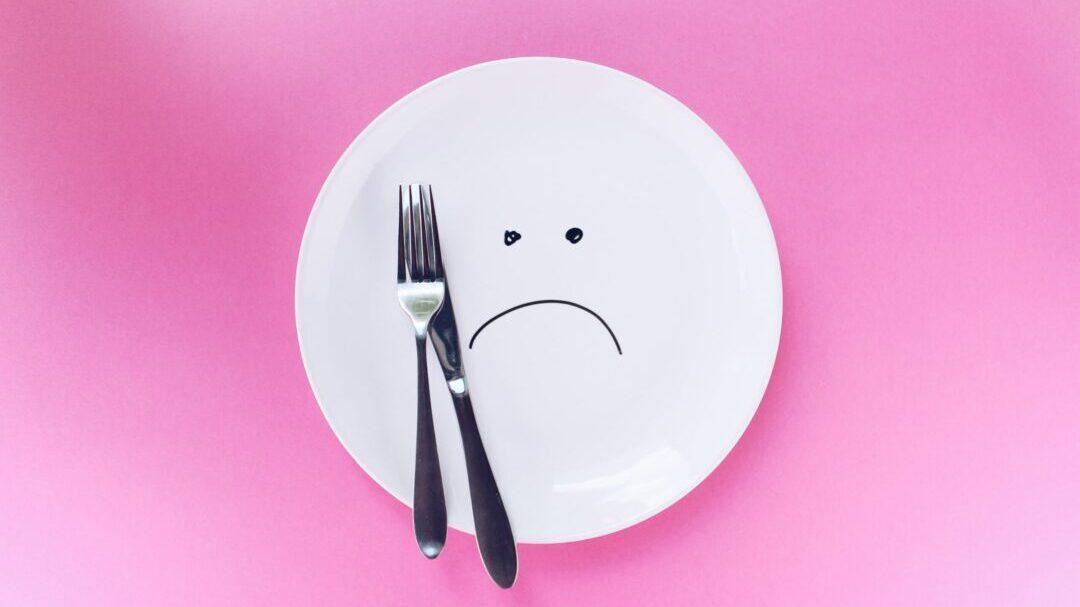 Does insulin resistance cause weight gain? The bottom line:

This question is the basis of an ongoing, intense debate between researchers trying to determine which of the following is more likely:

In addition, it also means that you store fat a lot more easily because insulin promotes fat storage.

When blood sugar levels are higher than they should be, but below the diabetic range, it’s known as non-diabetic hyperglycaemia or, more commonly, ‘prediabetes’.

If left untreated, the risk of developing type 2 diabetes, which can have serious complications, is very high.

Answering whether (A) or (B) is more likely helps us understand the development of type 2 diabetes.

If we learn how something develops, then we can find out the most effective target for treatment (insulin resistance and/or weight loss) and, more importantly, prevention.

This in-depth guide will cover 4 potential answers to our question:

Current view on the pathway to type 2 diabetes

The commonly held viewpoint on the development of type 2 diabetes is:

So today, most people believe:

Professor Roy Taylor is a professor of medicine and metabolism at the University of Newcastle. He and his research group have focused on understanding if, and how, you can ‘reverse’ type 2 diabetes.

On the research group’s university website, they have stated that type 2 diabetes can be reversed with major weight loss:

Here’s our first interaction between weight loss and insulin function. Professor Taylor is saying that if you lose weight, you can also return insulin action and secretion to normal.

The research group goes on to highlight one further critical point. The insulin-secreting function of the pancreas decreases once fat levels go above a person’s individual ‘fat threshold’.

This threshold varies from person to person and is highly associated with genetics and heritage (e.g. people of South Asian origin have a much higher risk and much lower fat thresholds). This is what they say:

‘A crucial point is that individuals have different levels of tolerance of fat within the liver and pancreas. Only when a person has more fat than they can cope with does type 2 diabetes develop. In other words, once a person crosses their personal fat threshold, type 2 diabetes develops. Once they successfully lose weight and go below their personal fat threshold, diabetes will disappear.’

Professor Taylor’s research paper provides an explanation for the whole cycle, which he has called the ‘Twin-cycle hypothesis’.

This cycle is extensively detailed, but this diagram helps to break it down. The cycle is described below, and key points are in bold. 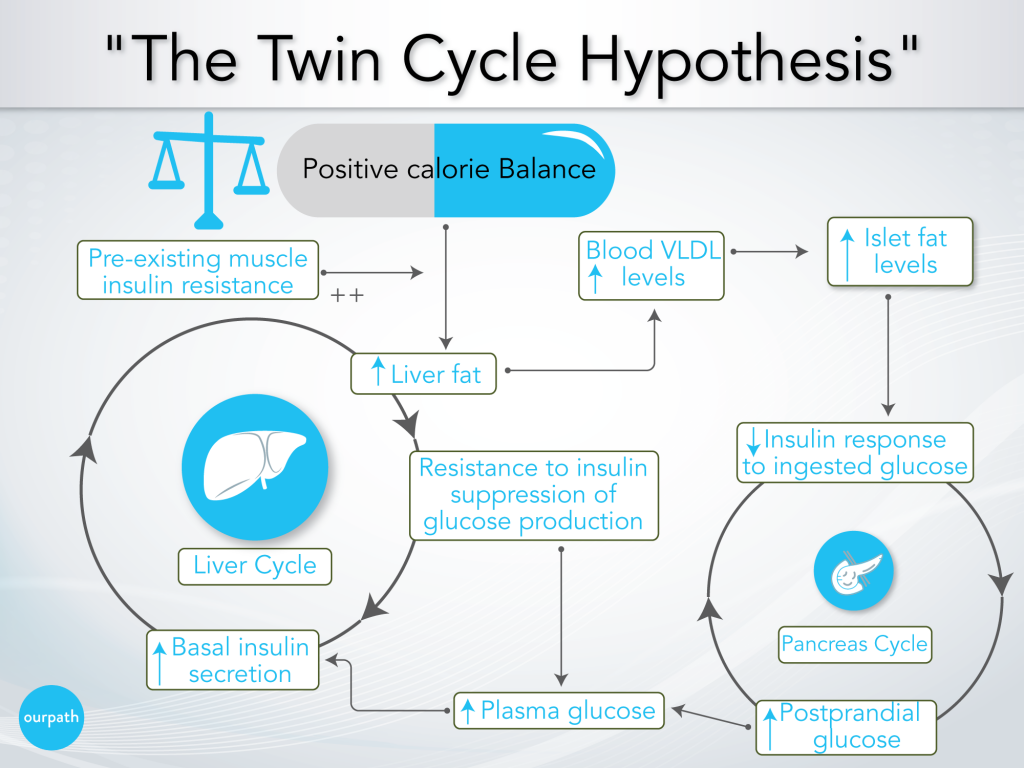 Fundamentally Professor Taylor says that the development of type 2 diabetes/ pre-diabetes is down to overeating and is heightened by eating excess carbohydrates.

Regarding our initial question, what comes first, insulin resistance or weight gain? Professor Taylor’s work suggests that either could come first, and they encourage each other in a self-perpetuating cycle.

Dr Peter Attia is a surgeon from America who developed pre-diabetes many years ago and successfully went into remission. He has dedicated his career to answering our questions and co-founded the Nutrition Science Initiative.

He speaks about his experience and his belief in the relationship between obesity and insulin resistance in his TED talk.

Peter poses the question about whether it’s insulin resistance which is driving obesity and weight gain:

So, he’s questioning whether we have the cause and effect of obesity and insulin resistance the wrong way around.

An alternative proposal for the development of type 2 diabetes comes from Professor Roger Unger, who has dedicated his career to clarifying ‘the roles of insulin and glucagon in the regulation of normal blood glucose homeostasis and the pathogenesis of diabetes’.

Professor Roger Unger’s 2014 prize-winning lecture turns the whole diabetes debate on its head by providing substantial evidence that it’s glucagon’s action, not insulin, that is crucial to the development of type 2 diabetes (and type 1 diabetes).

Glucagon stimulates the conversion of glycogen in the liver to glucose to be released into the blood.

He states, ‘ Glucagon action is required for type 2 diabetes… the way to stop this disease is to block glucagon action’.

Exploring this in a little more detail:

So, why is glucagon not being suppressed in people living with type 2 diabetes after they eat a high-glucose meal?

Professor Unger proposes that it results from insulin resistance in the pancreatic alpha cells. This effect is further compounded by the lack of the postprandial insulin spike in type 2 diabetics.

How do the pancreatic alpha cells become insulin resistant?

Here we return to the common theme running through the work of many of the above research groups: pancreatic fat levels.

This provides a possible explanation for the mechanism for why the postprandial insulin release is suppressed in type 2 diabetics (due to beta cell death), and why glucagon release is not suppressed (alpha cell insulin resistance).

Back to our initial question – what comes first, insulin resistance or weight gain? Professor Unger believes that it’s overeating (i.e. weight gain) which kickstarts the pathway to type 2 diabetes, but critically that the whole process is enabled by glucagon.

However, he doesn’t clarify the order of steps on this suggested pathway to diabetes. Does weight gain or hyperinsulinemia come first?

4. Dr Kendrick and the extreme exceptions

There will always be exceptions to any hypothesis. Dr Malcom Kendrick notes that:

‘There is a general principle in science that if you have a proposed mechanism to explain the physiology of a disease, then that mechanism needs to remain true in all scenarios.

Often it’s the case that mechanisms and theories unravel when you look at extreme scenarios.

In this case, this would mean looking at people that have absolutely no fat cells, and the most obese population on the planet.’

What are these exceptions to the mainstream notion of more body fat means a higher risk of diabetes?

You might expect that sumo wrestlers would have a high prevalence of type 2 diabetes, and people with Berardinelli-Seip lipodystrophy would have a low prevalence. However, in reality, the opposite is true.

How is this possible? The hypothesis is that it’s all down to energy storage, i.e. when you eat carbohydrate-containing foods and your blood sugar levels rise, where in your body does that sugar go?

They don’t become diabetic because extreme physical activity burns up glycogen stores in the liver and muscle, leaving space for insulin to push glucose from the blood into this tissue.

This means there’s no insulin resistance to overcome while sumo wrestlers are training.

Contrastingly, individuals with Berardinelli-Seip lipodystrophy have no fat cells.

So, even if insulin levels dramatically increase, excess energy has nowhere to go after a high-carb meal. This is why insulin resistance develops in this demographic.

Dr Kendrick hypothesises a different mechanism for the development of type 2 diabetes:

‘Whilst those with Beradinelli-Siep lipodystrophy cannot tell us much about diabetes and obesity in ‘normal’ people, this condition does make it very clear that diabetes (insulin resistance, high insulin and high sugar levels) is primarily an issue with energy storage, how the body goes about this storage, and the role that insulin plays.

If there is somewhere for excess energy to go easily, insulin levels will not go up, and nor will blood sugar levels.’

Aside from anything else in this guide, it does provide a compelling rationale for regularly engaging in high-intensity exercise or lifting weights; both deplete your muscle glycogen levels much more effectively than moderate-intensity exercise, like jogging.

Other factors also appear to be involved in the development of type 2 diabetes, including genetic factors (e.g. personal fat threshold).

Since we cannot change our genes, a lower carbohydrate diet, rather than low-fat, could be an excellent first line of treatment rather than drugs.

Nice article, thank you. The only comment would be that it does not have to be carbs. It has to be caloric surplus to cause those cycles.

Genetics must have quite a bit to do with it as well. I am joining Second Nature to lose a lot of weight, but my husband who eats the slightly more than me – we both are home all day – is thin as a rake. My weight has piled on during our married life partly because I simply eat as much as he does.

Absolutely fascinating and it does make complete sense. Illuminating writing. Thank you.

What about hunger? Why are some people more hungry than others? This must play a part in becoming overweight and at risk of diabetes as well. My slim pal forgets to eat – something I’d never do.
I used to be slim until I had a child. My mother was the same. After I had my son the hunger I experienced in my pregnancy never seemed to leave me.

Dear Diana Prince, if you are hungry during pregnancy that is normal. To alleviate symptoms, just simply suckle on a few sips of your own breast milk or till satiated.

Surely you don’t produce breast milk until you deliver the baby and so you are no longer pregnant!

Nice discussion, but you totally left the role of dietary fats, especially certain saturated fats in the insulin resistance pathophysiology. Instead, you focused only on researchers that highlight the role of carbohydrate. There is another side of the coin and it plays a very significant role as well.

I am diabetic, article was informative.

Excellent article. So good to read the different in depth views and research about this important issue. I am a type 1 diabetic whose body produces no insulin and relies on me getting my insulin doses correct in relation to the amount of carbohydrate I consume in order to lower my blood glucose levels manually. The body is amazing when it does it all for you and the message I get from this is that people should strive to help their bodies by not overeating and making sure they do enough exercise – both types! I appreciate the reminder about how the body processes glucose and deals with it. Insulin is a fat making hormone and it’s a tricky job making sure you you have enough to release energy whilst taking care not to create an imbalance. It is so worth making the effort to lose excess weight, eat healthily and exercise enough. Our bodies are incredible machines and we should all strive to maintain them and make them work for us on the best way they can. Thanks so much for proving us with the guidance and tools, evidence based research and information. I strive every day to keep my blood sugar levels in the right range and to help myself but it is relentless hard work! It is so nice to have your support and encouragement to keep me on track. Thank you.

Excellent reading material , explanations are simply explained and written in an easily understood format .many years ago as a student nurse this was the one physiological metabolic process that proved difficult initially to learn .eventually I did understand .