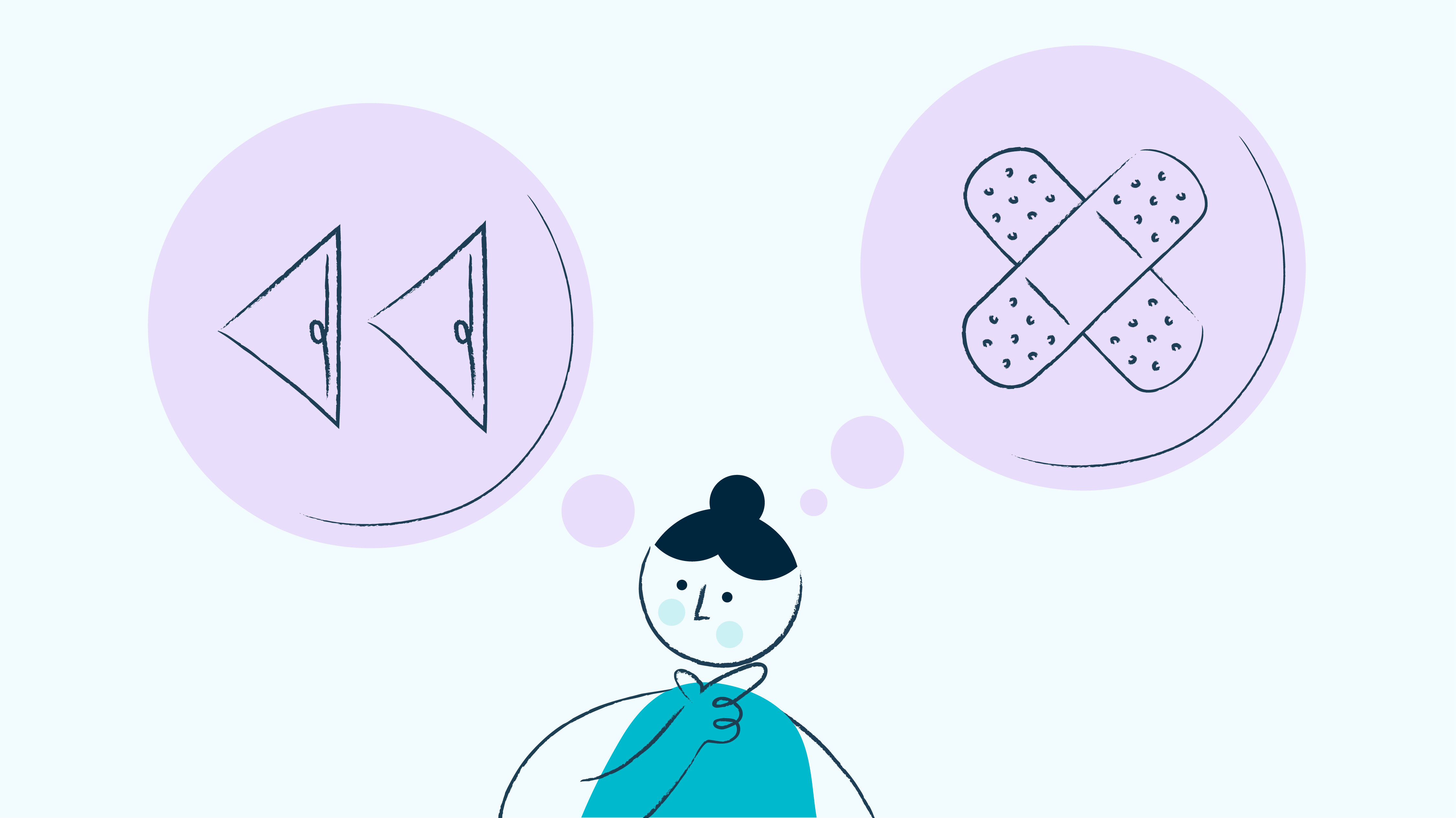 If blood sugar levels are consistently high, then there is a high risk of developing type 2 diabetes. This is usually known as ‘prediabetes’ (a.k.a impaired glucose tolerance). You can think of blood glucose levels as a continuum, with prediabetes and type 2 diabetes being points along the spectrum.

Rather than ‘curing’ type 2 diabetes, recent research has suggested that the condition can be reversed for some people following extensive weight loss. For individuals where this is possible, it means moving from the ‘type 2 diabetes point’ on the spectrum towards the healthy blood glucose point.

How do we measure the reversal of type 2 diabetes?

The usual marker of having reversed type 2 diabetes is when the condition is put into remission. There is some debate about the exact definition of remission. Diabetes UK defines remission as meeting these 3 criteria:

HbA1c (glycated haemoglobin) refers to red blood cells that have glucose attached to them. HbA1c levels are used because our blood glucose levels constantly change throughout the day based on when/what we eat and physical activity. Taking a one-off blood sugar measurement at a specific timepoint doesn’t help us to diagnose type 2 diabetes.

When the body isn’t able to use glucose properly, as with type 2 diabetes, it sticks to the red blood cells and circulates through our blood vessels. Since red blood cells have an average life of 3-4 months, HbA1c helps us to see the average blood glucose levels over a 2-3 month period.

For an individual with type 2 diabetes, the aim is to A) get into remission and B) get HbA1c levels as close to the healthy range as possible.

It is worth noting that the table above is a rough guide that can be useful for diagnosis, but it is still possible to have type 2 diabetes with an HbA1c level below 48 mmol/mol.

How do we achieve remission?

Significant weight loss appears to be the most effective way to achieve type 2 diabetes remission. Professor Roy Taylor, a leading researcher of type 2 diabetes, and colleagues at Newcastle University conducted the first ever dietary and lifestyle intervention trial with remission as the primary endpoint. This was called the DiRECT study. 320 participants, all diagnosed with type 2 diabetes within the last 6 years, were randomised into either the intervention group or the control group.

The intervention was a very low-calorie diet programme. Participants dramatically reduced energy intake to 850 calories a day and then were slowly reintroduced to a regular, healthy diet to maintain weight loss. The control group received the usual current treatment on the NHS for type 2 diabetes.

At 2 years, 36% of those who began the trial in the intervention group were in remission as opposed to 3% of those in the control group.

These results suggest that significant weight loss can reverse type 2 diabetes and result in regular insulin activity for some, even if the individual has been diagnosed up to 10 years ago.

To achieve significant weight loss, the DiRECT study placed participants on a low-calorie shake diet. This diet dramatically reduced overall energy intake. Although effective in the short term, we do not think low-calorie shakes are the easiest, healthiest, most cost-effective, or most sustainable approach to weight loss. This approach doesn’t teach people how to live healthily, only that there is a short-term fix that can be applied. Our understanding of the scientific literature is that it is far more effective in the long term to achieve weight loss and remission through healthy lifestyle and behaviour change.

The simple answer is no. Type 2 diabetes cannot be ‘cured’, but evidence suggests that significant weight loss can reverse the condition in some people. Once in remission, it is essential to maintain the weight loss otherwise type 2 diabetes will return.

Professor Taylor suggests a mechanism for how type 2 diabetes occurs, which explains why failing to maintain weight loss in remission leads back to diabetes:

The key point Professor Taylor adds is that everyone has a ‘personal fat threshold’. To go into remission (and stay in remission), you must lose enough weight (and maintain this weight loss) below your personal threshold. In his own words:

‘Some people can tolerate a Body Mass Index (BMI) of 40 or more without getting type 2 diabetes. Others cannot tolerate a BMI of 22 without diabetes appearing, as their bodies are set to function normally at a BMI of, say 19. This is especially so in people of South Asian ethnicity.’

Can everyone achieve remission?

Despite losing weight to below their personal threshold, some people can’t achieve remission. Professor Taylor acknowledges that a reduction in liver and pancreas fat is dependent on the ability of pancreatic beta cells to recover. If these cells are damaged beyond repair, perhaps from having type 2 diabetes for a very long time, then significant weight loss is unlikely to reverse diabetes successfully.

In his prize-winning lecture about the pathology of diabetes, Professor Roger Unger suggests that the build-up of fat in the pancreas causes ceramide to accumulate in the pancreas. Ceramide is toxic and kills pancreatic beta cells. It is possible that having type 2 diabetes long enough (10 years plus) without treating it leads to too many pancreatic beta cells getting destroyed by this process. This means that even if individuals lose weight to below their personal fat threshold, they will not be able to go into remission.

This highlights the individual variability of type 2 diabetes and the complex systems at play when we talk about reversing it or going into remission.

This could partly explain why not all of the participants in the DiRECT study who lost a significant amount of weight went into remission. Perhaps some participants didn’t lose enough weight to reach below their personal fat threshold, and those that did but didn’t achieve remission possibly had irresolvable pancreatic damage.

Exceptions to the rule

Professor Taylor caveats that all of this research is relevant for individuals with the ‘usual’ form of type 2 diabetes. Rare forms of diabetes exist that can easily be mistaken for type 2 diabetes, including:

A) ‘Pancreatic’ diabetes
This occurs after several cases of pancreatitis and is likely to be caused by pancreas damage.

B) ‘Monogenic’ diabetes
This genetic form of diabetes is commonly found in slim individuals diagnosed in early adulthood who have a very strong family history of diabetes.

I was told I was diabetic 18 months ago and they wanted to put me on metformin, statins and betablockers. I refused as I wanted the chance to reverse it. Over the next year with strict carb control I lost 62lbs and am now in remission and my results are normal. I know I have to stick to the diet and keep the weight off to prevent it returning. I do not think you need to have ‘shakes’ as they teach you nothing.

Learning what carbs are, not just sugar, and how much is in all foods by reading labels and using the Internet is easy these days. Yes you have to be strict but when you learn about all of the nasty things diabetes can cause it isn’t that hard. I didn’t exercise as I am unable to due to severe arthritis and awaiting joint replacement but I did it.

People need more education on the severity of diabetes and its nasty problems and not just think it’s a minor problem. Once you get your head round it and understand it it honestly isn’t that hard to have a low carb diet, there’s a lot out there to help these days and there are still things you can have for the occasional treat and you do feel better for losing the weight.

I also swore by using a blood glucose monitor in the early days so I could learn what foods spiked my blood sugars the most, like a banana, I hardly use it now but do check sometimes just to keep an eye on things.

I know it won’t always work for everyone and sadly some people don’t want to try and are happy to pop a pill but I would encourage people to try, it can be done and it certainly won’t make matters worse!

Many thanks very helpful. I have been diagnosed with type 2 for nearly 10 years. I suspect I may have had it longer. I congratulate everyone whose gone into remission. I appreciate not of all of us can do this. However important to talk about and encourage people generally to keep off the carbs and exercise. Perhaps more contentiously to campaign to reduce the addition of sugar into food, by the food industry. A sugar tax to prevent this continual and devastating adulteration of food.

Hi Janet, There is one situation where type II DM can be definitely cured. Drug induced diabetes.
Also as the diagnosis of DM is and has been based upon, an ever changing cut off point for tests with already quite considerable coefficients of variation and significant day to day biological variation, the definition/difference between remission and cure would be vague anyway. Diabetes cut off points are based upon the risk of developing another disease (retinopathy) with the original cut off points based upon a study in the Pima Indians, a group with high risks of DM.

Furthermore, One study showed that if you give a standard cereal/milk breakfast to so called non diabetics a large proportion will display very high BG after 2hrs, many in the so called diabetic range after 2 hrs, this in individuals who are considered “normal” for all three blood tests.

Philosophically, consider this scenario , if all those with diabetes who had not been yet been medically diagnosed as such (undiagnosed DM), lost weight, ate well etc and went back into the “normal” BG range they would never have been considered to have diabetes. I think it would be a brave doctor (wanting to be sued) to then diagnose a patient as DM when all the blood parameters were considered normal. Attainment of consistent “normality” should be therefore considered a non diseased state i.e. cured. If they sometime in the future become DM again then they have moved back into a diseased state. Remission when used for cancer converts to cured when a certain time has elapsed. So yes Diabetes (type II) can be cured and there needs to be a change in mindset from this being a chronic disease to a treatable disease.