What are plant-based diets?

Plant-based diets are predominantly or exclusively made up of plant-based foods. The most famous of which is the vegan diet and the vegetarian diet.

A vegan diet is exclusively plant-based, doesn’t include animal products such as meat, fish, seafood, dairy products, or eggs – and even excludes honey as it involves using animals (bees) in its production.

There are multiple versions of the vegetarian diet. However, it excludes all flesh of animals and fish but still includes foods produced by animals, such as eggs, dairy products, and honey.

You might also come across individuals on a pescatarian diet where they don’t eat any meat from land-based mammals, such as cows, game, or chicken – but they eat fish and seafood as their primary protein source.

However, more people are adopting flexitarian-style diets where they’re eating meat much less regularly and predominantly basing their diet on plant foods but enjoying meat a couple of times a week or even less frequently.

Motivations for enjoying a plant-based diet

The rise of plant-based eating has been attributed to people’s increased awareness of animal welfare, their health, and concerns about the environment.

These topics are controversial, and there’s no simple answer to the debates.

Should we eat animals?

Humans have evolved by eating meat, and the development of our brains has been attributed to adding bioavailable protein, fat, and micronutrients from meat to our diet over three million years ago.

However, modern agriculture often confines animals to a short life that doesn’t promote the natural behavioural and social interactions that would promote their health and well-being.

We might have evolved eating meat, but animals certainly didn’t evolve to live in a shelter and be restricted to outdoor space most of the year.

It’s likely that how we farm animals and consume meat needs to change, but what this looks like when we need to feed a planet of 8 billion is unclear.

Even if we farm animals ethically and sustainably, some people may still struggle with the notion of eating animals.

Land use and deforestation are also a concern, with large areas of the Amazon, for example, being felled for livestock grazing in South America.

However, there are examples of more progressive, regenerative farming techniques – where animals are used in a cyclic system to support the regeneration of the landscape and fertilise the soil for crop production – that can be carbon neutral or even carbon negative.

There’s much more to the environmental debate than just carbon emissions. We also must consider soil health and support the transition from chemical fertilisers.

We also need to be aware that we’ll unlikely ever reach a perfect system where food production does zero harm. Instead, we need to look at optimising it to minimise its impact on the planet.

It’s likely that to support the transition to a more sustainable food system, our current farming practices will need to change – and this might mean we all end up eating less meat, with some people opting to avoid it altogether.

Plant-based advocates often promote plant-based diets as the optimum diets for human health. The truth is, it’s a lot more complicated than that – and all diets have pros and cons.

Whilst there’s good evidence that vegan and vegetarian diets can be health-promoting and reduce the risk of chronic diseases such as heart disease and type 2 diabetes, they also come with disadvantages.

These include a higher risk of vitamin and mineral deficiencies (such as vitamin B12, calcium, and iron) and an increased fracture risk compared to meat-eaters.

Some recent research also shows a potential association between vegan diets and poor mental health, such as depression.

However, these are only associations at present, so the causal mechanisms are unclear.

It may simply be that individuals following a vegan diet also happen to avoid certain health-promoting behaviours that support mental health.

At Second Nature, you’re provided with a registered nutritionist or dietitian available to support you in maintaining a healthy diet, plant-based or other, five days a week.

Otherwise, keep reading as we look at three plant-based diets in more detail.

This goes beyond a vegetarian diet, which typically contains no meat or fish, to exclude dairy products such as milk and cheese and items such as eggs and honey.

Vegan diets encourage the consumption of:

Vegan diets discourage the consumption of: 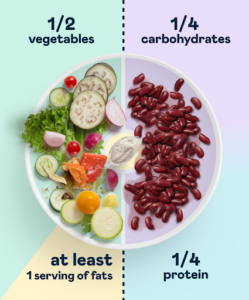 Research suggests that those who follow a vegan diet tend to eat more fruits and vegetables than any other diets and can provide health benefits.

Vegan diets have also been found to have a higher intake of carbohydrates. Plant-based protein sources, such as beans, lentils, and legumes, often contain carbohydrates.

To ensure that a vegan diet contains enough protein, you typically need to consume more carbohydrates than would be necessary for a meat eater.

Or have a high consumption of plant sources of protein like tofu and protein isolates like pea and potato.

Individuals following a vegan diet are also more likely to experience specific micronutrient deficiencies, such as B12 and iron deficiency, and have a higher fracture risk.

Click here for a complete guide on ensuring you’re consuming all the essential nutrients you need on a vegan diet. You can also click here if you want a 7-day vegan meal plan.

There are many different forms of a vegetarian diet, with some vegetarians avoiding only the flesh of the animals (meat) and others avoiding eggs or dairy.

Predominantly, the term vegetarian (or veggie) refers to individuals who base their diets on plant-based foods such as whole grains like quinoa and brown rice, lentils, legumes, chickpeas, nuts, seeds, and vegetables.

They’re predominantly plant-based diets as they don’t eat the flesh of animals but, different to vegan diets, consume some animal products such as eggs or dairy foods. 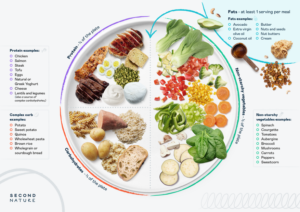 Vegetarian diets can be health-promoting, but similar to vegans; vegetarians tend to have a higher risk of certain deficiencies and poorer bone health than meat eaters.

For a full review of the vegetarian diet, click here. You can also click here for a 7-day vegetarian meal plan.

A more recent craze that’s risen in popularity with many meat-eaters keen to lower their intake of meat and other animal products, typically to try and reduce their carbon footprint but aren’t willing to avoid animal products altogether.

A flexitarian diet is essentially an omnivore diet that contains less meat than many people in Western cultures eat. You could refer to these individuals as semi-vegetarian.

So, rather than having meat, fish, or seafood as your protein source at every meal or every dinner, you’d opt for vegetarian or vegan dishes 2-4 times a week or even more.

The most famous version of a diet like this is the Mediterranean diet, which has a very high intake of plant-based foods that also includes animal products, mainly fish, seafood, dairy, and pork.

For a complete review of the Mediterranean diet, click here.

A flexitarian approach is also similar to the advice offered by Second Nature. We recommend a diet based on a high consumption of whole foods with various protein sources.

If you’d like a 7-day meal plan developed by the dietitians at Second Nature which contains a variety of meat and plant-based meals, click here.

Plant-based diets vary from the more extreme versions, such as the vegan diet, to the more flexible approaches, like the Mediterranean diet.

While you don’t have to avoid animal products altogether to achieve optimum health, most people aren’t consuming enough vegetables and plant foods. Still, they consume too many animal products from ultra-processed foods like chicken nuggets.

If more of us can switch to consuming a higher volume of plants from whole foods like fruits, vegetables, nuts, seeds, and legumes, alongside whole sources of meat and animal products if we choose to, we’d likely all see vast improvements in our health.