Low-fat diet: All you need to know The global recommendations to follow a low-fat diet date back to the 1970s when the U.S. became the first major country to recommend it in their dietary guidelines to lower cholesterol levels (particularly LDL cholesterol) and reduce our risk of heart disease; countries like the UK, New Zealand, and Australia soon followed suit.

A low-fat diet is based on a high intake of starchy carbohydrates, lots of fruits and vegetables, lean protein sources, and low amounts of saturated fat.

Unfortunately, adopting low-fat diets within our guidelines has coincided with an unprecedented rise in obesity, cardiovascular disease, and type-2 diabetes.

The focus on restricting fat has also allowed the food industry to develop cheap, hyper-palatable ultra-processed foods rich in refined starches and sugar and advertise them as ‘healthy’ as they’re low in fat.

While it’s possible to eat a whole-food low-fat diet and be healthy, it may not be the optimum way to eat. Good evidence suggests that diets containing higher fat than is typically recommended are more beneficial for our health and reduce our risk of heart disease.

What is a low-fat diet?

At the same time, it promotes a high intake of starchy carbohydrates as your primary energy source.

A low-fat diet encourages the consumption of:

A low-fat diet discourages the consumption of:

Is a low-fat diet healthy?

It has healthful components, such as the recommended intake of fruits, vegetables, and fish. However, research suggests that dietary patterns containing more fatty acids are more beneficial for weight loss and lower the risk of chronic diseases such as cardiovascular disease and type-2 diabetes.

It’s possible you can achieve good health by eating a low-fat diet, but it might not be optimum.

There are also concerns about how sustainable the diet is, with multiple clinical trials showing that individuals on a low-fat diet typically struggle to adhere to the recommendations.

Recent research has also suggested that low-fat diets change dopamine (a neurotransmitter involved in motivation and reward) signalling in the brain that may encourage people to consume excessive amounts of energy-dense, ultra-processed foods.

There’s also the psychological issue with advising people to follow strict dietary patterns. Research suggests that when people are instructed to avoid or limit a particular food, they’re more likely to crave and overconsume it.

By telling people to avoid fat, it may focus too much on one nutrient that may lead to its overconsumption in the form of hyper-palatable, ultra-processed foods.

At Second Nature, we don’t restrict fat or entire food groups. We provide evidence-based, sustainable solutions to help you ditch the fad diets and make weight loss feel easier. You’re also provided with a registered dietitian or nutritionist to support you 1-2-1.

You can join people like Jo who’ve achieved all their health goals without having to count calories or eat bland low-fat foods. All you need to do is click here to take our health quiz.

Otherwise, keep reading as we analyse three lines of evidence looking at the impact of low-fat diets on health.

Losing weight is a simple physiological equation of burning more energy than you consume. Two ways to contribute to this equation are to eat less food and increase your daily activity.

Low-fat diets are no different in this sense. Trials comparing low-fat diets with other diets higher in fat have shown they can support modest levels of weight loss. A randomised controlled trial compared four different diets and their impact on weight loss after 12 months:

However, in a research environment, people are extrinsically motivated to adhere to the diet that they’ve been assigned. Often there’s a financial incentive to complete the study that would motivate people even if they wouldn’t be able to outside the research setting.

Therefore, while these human trials have shown that low-fat diets can support weight loss, it’s unclear whether they suggest that the diet can be replicated in real-world environments.

2) Low-fat diets may not be sustainable for many people

While weight loss is a simple equation from a physical perspective, the determining factors of weight loss maintenance are more complicated. Our psychology and how much we enjoy our food can determine how well we can adhere to a specific diet.

A recent study showed that restricting dietary fat during weight loss changed dopamine signalling in the brain. This encouraged the consumption of ultra-processed foods rich in refined carbohydrates, added fat, and sugar.

This impact on dopamine may explain some results in randomised controlled trials that suggest low-fat diets are difficult to adhere to for many people.

A study looked at the impact of a low-fat and Mediterranean diet on risk factors for cardiovascular disease. Interestingly, the researchers also analysed how well participants adhered to their diets.

They found that those on the Mediterranean diet could meet their minimum target of eating at least 35% of their calories from fat and ate more, averaging around 40%.

In contrast, those on a low-fat diet struggled to adhere to their target of eating less than 30% of their calories from fat, averaging 32%. This suggests that strict low-fat diets may be difficult to maintain in the long term.

This is further supported by trials showing that diets higher in fat can help with weight loss in the long term. 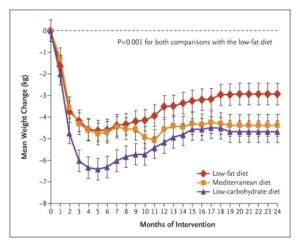 One of the leading theories supporting the introduction of low-fat diets in the 1970s is that they would bring the most health benefits, lower cholesterol levels, and reduce the risk of developing cardiovascular disease and other chronic diseases like type-2 diabetes and possibly some cancers.

However, recent human trials comparing diets of very similar design but with different levels of fat content have suggested otherwise, and dietary guidelines around the world are starting to shift. Even the American Heart Association recently removed its guideline on an upper limit of fat intake.

A large randomised controlled trial involving over 7,000 participants investigated the effects of a Mediterranean diet supplemented with more fat – either in the form of added extra virgin olive oil or nuts – compared to a low-fat diet in individuals at risk of cardiovascular disease.

Another randomised controlled trial with over 1,000 participants with existing cardiovascular disease investigated the effect of the Mediterranean diet on the risk of experiencing future cardiovascular events.

This is a secondary prevention trial, as they’re looking into the impact of the diet on individuals who already have the disease. The study showed that a Mediterranean diet reduced the risk of experiencing another cardiovascular event, such as heart attack or stroke, by 27% compared to a low-fat diet.

Similarly, a recent randomised controlled trial compared a lower-fat DASH diet to a higher-fat DASH diet to determine their effects on weight loss outcomes and other risk factors for cardiovascular disease such as very-low-density lipoprotein (VLDL) and triglycerides.

The study showed that both the lower-fat and higher-fat DASH diets improved blood pressure to a similar degree. But interestingly, the higher-fat DASH diet saw more significant reductions in VLDL and triglycerides – suggesting a higher fat intake led to greater improvements in overall risk for cardiovascular disease.

If you’d like to try a sustainable, balanced diet that doesn’t restrict your total fat intake, helps to manage your blood sugar levels, is heart-healthy, and doesn’t leave you obsessing over your calorie intake, click here to try our NHS-trusted meal plan.

Low-fat diets were promoted as the ultimate healthy diet for heart health in the 1970s.

This message was perpetuated to such an extent that it continues to this day, with many public health bodies still advocating its use. This is despite clear evidence suggesting that diets that don’t restrict the amount of fat we eat are more beneficial for our overall health.

This isn’t to say you can’t be healthy and enjoy a long life while eating a low-fat diet. If it’s a diet that you can enjoy and sustain, then that’s the most important thing.

However, the available evidence does not support the notion that a low-fat diet is the best for optimum health.

If you’re struggling to lose weight and achieve good health outcomes while trying to eat a low-fat diet, you might benefit from shifting to a diet that enables you to enjoy more fat.

This doesn’t mean you must follow a strict low-carb diet, like keto. But a diet that doesn’t restrict the number of servings of fat to unsustainable levels, as is often seen in modern low-calorie diets obsessed with counting grams of fat.

Evidence suggests you might find it more sustainable, and your long-term health will benefit too.