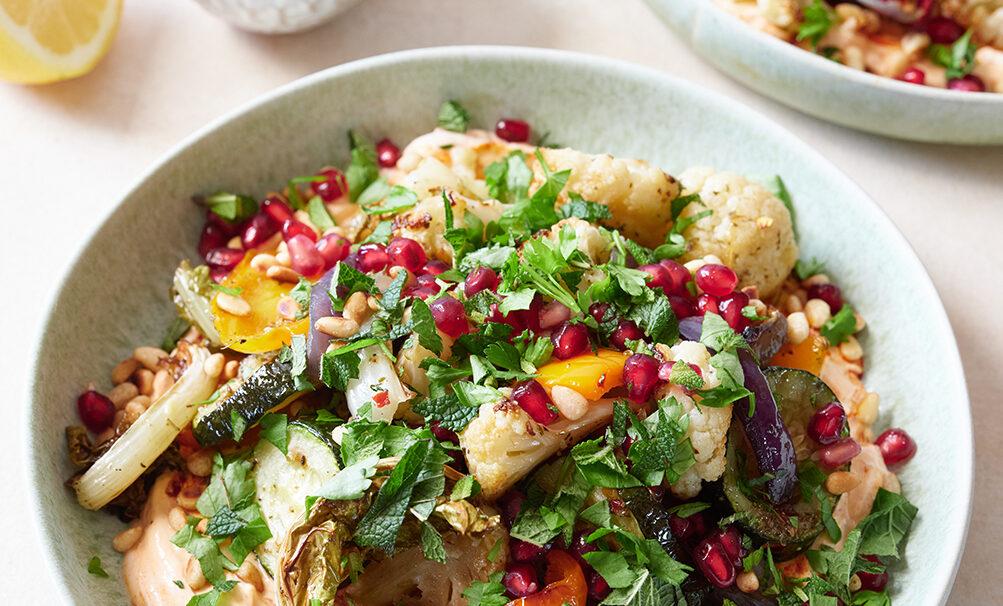 Vegetarian diets are rising in popularity, with nearly 7 million people in the UK identifying as vegetarian. With concerns about the ethics of animal agriculture and the environment, more people are looking to shift towards a more plant-based diet.

However, you don’t have to be vegetarian to enjoy plant-based delicacies, we could all do with increasing the amount of variety in our diets. Our ethos at Second Nature is all about enjoying a healthy balanced diet that includes a wide variety of sources of protein, fat, fibre, and complex carbs.

Whether you’re vegan, vegetarian, pescatarian, or a meat-eater – we believe a varied diet based on whole foods is the best way to achieve optimum health and ensure you give your body everything it needs to thrive.

If you’d like to join people like Sarah who’ve joined Second Nature and changed their minds about healthy living to make weight loss feel easier while eating a plant-based diet, click here to take our health quiz.

Our team of registered dietitians has developed these 5 delicious and healthy vegetarian recipes for you to enjoy any day of the week. They’re packed with protein, fibre, and healthy fats and provide a source of complex carbohydrates.

They’re guaranteed to leave you feeling full and satisfied until your next meal, stabilising your blood sugar and energy levels which will help your weight loss journey in the long run. 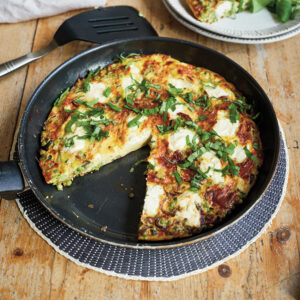 In a non-stick frying pan, add the oil and fry the onion and garlic, over a medium heat, for 5-8mins, or until softened and caramelised. At the halfway point add the balsamic glaze and stir to combine. Remove from the pan and set aside.

Add the butter to the same frying pan and fry the courgette and the defrosted peas, for 2-3mins, or until just softened.

Add the eggs, milk, and basil to a small mixing bowl, season with salt and pepper, and mix well.

Add the red onion and garlic back to the pan and pour the egg mixture over the vegetables in the frying pan. Lightly stir to combine and cook on low/medium for 5-8mins, or until the egg starts to set slightly.

Heat the oven to grill and dollop the goats cheese evenly on top just before placing under the grill for 5mins, or until just browning. Leave the frittata to cool before slicing and serving with a side salad and fresh basil on top. 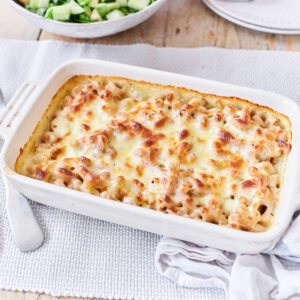 Cook the pasta al dente (undercooked). It will cook in the oven with the sauce later.

To make the roux, heat a non-stick saucepan over low/medium heat.

Add the butter until melted, then the flour, and stir until fully combined. Cook the flour in the melted butter for at least 2mins so the sauce loses the taste of flour.

Slowly add the milk (50ml at a time), until the roux coats the back of a wooden spoon (roughly 10mins).

Add the 150g of cheddar to the roux mixture and stir until melted. Season lightly with salt and pepper. If the sauce looks too thick, add a dash more milk. The sauce will thicken the more it’s heated.

Add the par-cooked pasta to the pan and stir to coat it fully in the sauce.

Transfer to an ovenproof baking dish, top with the 70g of extra cheese and bake in the oven for 15mins, or until golden. Serve with salad or vegetables. 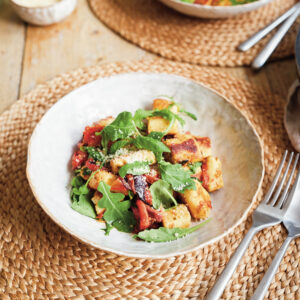 Add the peppers, tomatoes, red onion, oregano and garlic to a non-stick baking tray and drizzle evenly with oil and season generously with salt and pepper. Pop in the oven and bake for 25-30mins, or until the vegetables have softened and the tomatoes have started to blacken on the skins and release sticky juice.

Add the drained ricotta, egg, egg yolk, parmesan, flour and a pinch of salt to a large mixing bowl and mix using a silicone spatula. The consistency should be relatively sticky but can form a ball, although the ball will stick to the bowl.

Lightly flour a non-stick surface. Shape the dough into a square and cut into 4 equal parts.

In a non-stick pot, boil a pot of water.

Stretch each part into a long log. Don’t use too much flour on the surface as a bit of stickiness can help form the log rolls as you stretch it out. Each log should be roughly 2cm thick.

Add the gnocchi to the boiling water, gently stirring as you add them so they don’t stick together. Cook the gnocchi until they float, roughly 2-3mins. Drain and set aside.

Drain the boiling water from the non-stick pot, over medium heat, add the butter and begin to melt, you want the butter to brown slightly before adding the boiled gnocchi.. Brown the gnocchi for 1-2mins. Add the grilled vegetables and turn off the heat. Add the rocket and basil and stir through.

Serve topped with a sprinkle of extra cheese. 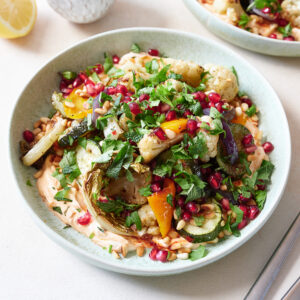 1 small cauliflower head, cut into florets (also use the leaves and stalks)

Add 150g yoghurt to each plate. Swirl in 1-2 tsp of harissa per plate. If you can handle spicy food add 2 tsp each, although remember you can always add a bit more harissa later!

Mix the tahini, hot water, olive oil and lemon to create the dressing.

Top the yoghurt with the roasted vegetables, toasted pine nuts, pomegranate seeds, fresh parsley and mint. Serve with a drizzle of dressing (or without if you prefer the flavour). 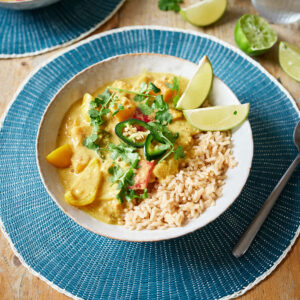 Heat the oil in a wok or large frying pan, over medium heat. Fry the onion, garlic, ginger, and chilli, until softened.

Pour the vegetable stock and coconut milk into the wok, season with salt and pepper, bring to a boil, then reduce the heat to low and simmer for 8-10mins.

Add the peppers and cook for a further 3mins, or to desired softness.