Is the carnivore diet healthy? 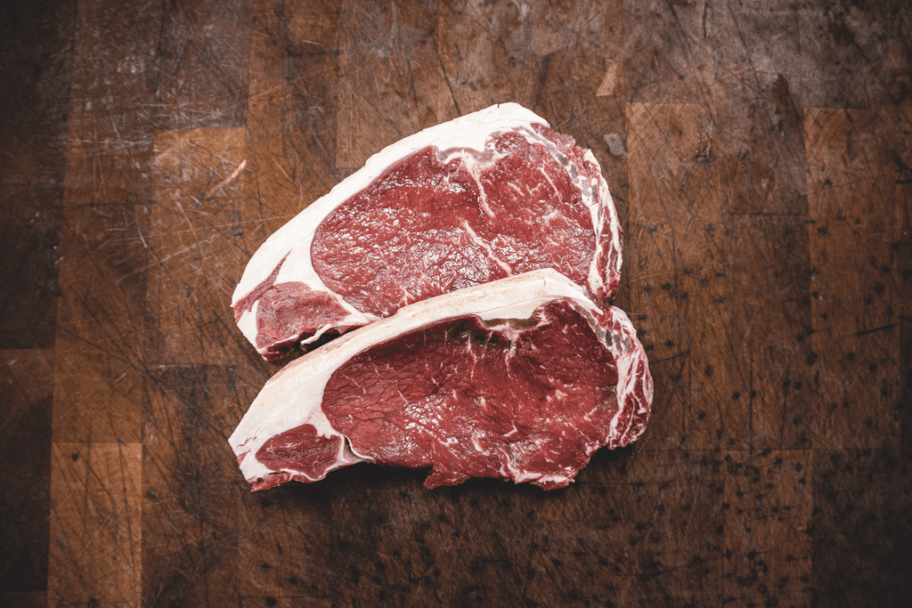 The carnivore diet has come to the fore on social media over the last five years. While research is scarce, surveys conducted on people following the carnivore diet report improvements in markers of chronic diseases, mood disorders, and auto-immune conditions.

It’s important to note that self-reported data, like surveys, are a very weak form of evidence. Surveys can be used to develop hypotheses and guide future research but shouldn’t be considered to guide lifestyle choices.

What is the carnivore diet?

As the name suggests, the carnivore diet is a diet based entirely, or at least predominantly, on animal-sourced foods with little to no intake of plant-based foods. It’s a high protein, high-fat diet almost entirely devoid of carbohydrates.

It’s based on the belief that humans evolved to eat a meat-heavy diet and that plants contain toxic compounds and anti-nutrients that prevent humans from reaching optimum health.

The carnivore diet encourages the consumption of:

The carnivore diet discourages the consumption of:

Is the carnivore diet healthy?

While it has some healthful components, such as bioavailable nutrients from animal-sourced foods and high-quality protein, there is little to no evidence of the long-term effects of a diet that completely excludes plant foods.

Some of the claims within the carnivore community have threads of truth in them, such as plants containing anti-nutrients (such as phytates in lentils that prevent the absorption of iron) and that humans evolved eating meat.

However, the issue comes when these observations are extrapolated to promote extreme versions of the truth.

There are also concerns about the adequate intake of many nutrients and minerals such as vitamin C and calcium. As well as the potential negative impact it might have on our gut health – an organ that often relies on the by-products of carbohydrate and fibre digestion.

While we can draw on reports from Arctic societies such as the Inuit, case studies, surveys, and anecdotal evidence, we’re mainly left to speculate on physiological mechanisms as to how the body might manage the conditions created by the carnivore diet.

Still, human physiology is highly robust and flexible. And if the carnivore diet can provide all essential nutrients, it could be healthy for some people who follow it. However, there’s a difference between what’s possible and what’s optimum.

At Second Nature, we don’t rely on speculation or restrict entire food groups. We provide evidence-based guidance to help you achieve your health goals with the support of a registered dietitian or nutritionist.

Otherwise, keep reading to learn more about the carnivore diet’s history and future direction. You’ll find three sections with different lines of evidence with a conclusion at the end.

1) Are humans designed to eat a meat-only diet?

There’s clear evidence that humans evolved eating meat. Researchers have found evidence of tools and butchery use at hominin (an ancient human ancestor) sites dating as far back as 1.5 million years ago. While other evidence suggests, it could go back to more than 3 million years ago.

Did this impact how we evolved?

It’s suggested that increased meat and fat consumption – alongside foraged plants – allowed the human brain to develop and become larger. As the gut no longer needed to digest such large amounts of fibrous plant material, this shrank alongside increased brain size.

Research also suggests that as the gut and the brain are both energy-costly organs, mammals can’t have large versions of both. For example, primates typically have smaller brains than humans.

Still, they have maintained their larger gut – particularly the colon, which is almost twice our size as their diet has remained predominantly plant-based.

So it’s clear that meat was a part of our evolutionary history, but does that mean we’ve evolved to eat only meat?

Despite the inclusion of meat in our diets, there’s no clear evidence that we ate a strict meat-only diet. Research suggests that our diets were heavily influenced by season and location.

Our ancestors are considered opportunistic omnivores; it seems we ate what was available.

Research in modern hunter-gatherer societies supports this theory. The Hadza are a hunter-gatherer tribe in Tanzania, East Africa. Studies have shown that they consume a diet rich in meat and plant foods, particularly wild game, honey, berries, and tubers.

This isn’t to say that the Hadza diet is the optimum diet for human consumption. They’re simply eating what is available to them in their environment.

In modern affluent societies, we have the privilege of accessing a wide variety of foods, so we no longer have to be constrained by seasonality and geographical location. This allows for greater variety and a lower risk of being deficient in certain nutrients.

One of the theories behind the carnivore movement is the suggestion that plants contain toxic compounds harmful to human health. As plants don’t have teeth or antlers to protect themselves as animals do, they’ve developed chemicals to prevent them from being eaten.

Like many theories developed in the field of nutrition, there are elements of truth in this statement. For example, lentils are a source of non-heme iron but also contain phytic acid (phytates), which inhibits iron absorption in the gut.

However, throughout human history, we’ve developed methods to improve the nutritional value of different foods and increase the bioavailability of key nutrients.

Methods such as cooking, milling, soaking, and fermentation have all been shown to reduce anti-nutrient content and increase the bioavailability of minerals such as iron and calcium.

Selective breeding and modernising our agricultural processes also means that many potentially harmful compounds in plant foods have been significantly reduced or eradicated.

So while there’s truth in the observation that plants contain anti-nutrients, humans have developed methods over our history to improve the nutritional value and digestibility of these foods to promote good health.

Biochemical reactions aside, evidence suggests that diets high in plant food such as fruits, vegetables, nuts, seeds, and legumes are health-promoting. Individuals with higher levels of plant foods in their diets have a lower risk of developing obesity and other chronic diseases such as type-2 diabetes.

This remains true even in the absence of other dietary changes. A study investigated the impact of two different types of the standard American diet (a diet that’s typically high in ultra-processed foods and low in plant foods).

The first group was instructed to carry on eating their standard diet, while the second group was given the same instructions but to add an extra four servings of fruits and vegetables daily.

The study showed that the individuals who consumed more fruits and vegetables improved their blood pressure, while the group without added fruit and vegetables saw no changes.

This suggests that even a modest addition of fruit and vegetables to our diet can improve markers of our physical health, even in the absence of other dietary changes.

A concern with the carnivore diet and any diet that restricts entire food groups, such as the vegan diet, is they may increase the risk of micronutrient deficiencies and negatively impact our health in the long term.

This isn’t to say you can’t obtain all of the nutrients you need in these diets; rather, it becomes more challenging to obtain them as the variety and choice of foods in your diet are limited.

There’s also variety in the style of carnivore diet people are consuming, with some only eating steak and eggs, for example. Any added restriction in what could be considered an already restricted diet will likely increase the risk of deficiencies.

A paper discussing the availability of certain nutrients in the carnivore diet highlighted that beef tongue was the best source of vitamin C, with 1.3mg per 100g. Fish roe and liver are also potential sources of vitamin C.

General guidelines are to consume a minimum of 40mg of vitamin C daily. While individual requirements vary, if we were to assume 40mg was the ideal target, you’d need to consume 3kg of beef tongue daily.

Interestingly, case study reports of individuals eating a carnivore diet for a year showed no clinical signs of scurvy (vitamin C deficiency). While unproven, it’s suggested that when you eat a carnivore diet, your requirements for vitamin C drop.

As no long-term studies have investigated this, it’s unclear what impact this would have on our health.

While fibre is not an essential nutrient for survival, it’s widely considered beneficial for our health to support the function of our gastrointestinal (GI) tract and the diversity of our gut microbiota (bacteria).

What impact would a diet without fibre have on our gut?

Studies have shown that in individuals with conditions such as IBS, IBS-like symptoms, or SIBO (small intestinal bacterial overgrowth), removing fibre from the diet can relieve symptoms in the short term.

A small trial on six patients living with SIBO showed that five of the six patients tested negative for SIBO after four weeks on a carnivore diet. Research has also shown that reduced fibre intake can improve symptoms of constipation, bloating, and flatulence in the short term.

In contrast, a review found that 77% of individuals treated with more fibre found relief in these symptoms. It’s been suggested that while reducing or removing fibre can provide short-term relief from symptoms, it may not necessarily treat the underlying causes of those conditions.

Gut health is complex and multifactorial; it doesn’t come down to fibre alone. The overall quality of our diet, sleep, exercise, and mental health will all have a role to play.

Unfortunately, there’s limited research on the long-term effect of a fibre-free diet on our gut and overall health, so it’s unclear what impact the carnivore diet will have.

It’s not surprising to hear stories of individuals improving their health after transitioning to a carnivore diet. The increase in high-quality protein and bioavailable nutrients will likely be an improvement from diets based on ultra-processed foods rich in refined carbohydrates and sugar.

Unfortunately, we have no long-term research to draw conclusions on the impact of the carnivore diet on our health. It’s possible that humans could be healthy on a carnivore diet as the human body is highly robust and resilient.

However, there’s a difference between what’s possible and what’s optimum.

Any diet that restricts entire food groups has the potential to be problematic. It’s likely that to reach optimum health, a diet based on the consumption of both animal and plant foods is the best bet to ensure we’re providing our bodies with everything they need to not only survive but thrive.

Is the DASH diet healthy?

How to get all essential nutrients on a vegan diet

Is a low-fat diet healthy?