Does Saturated Fat Cause Heart Disease? 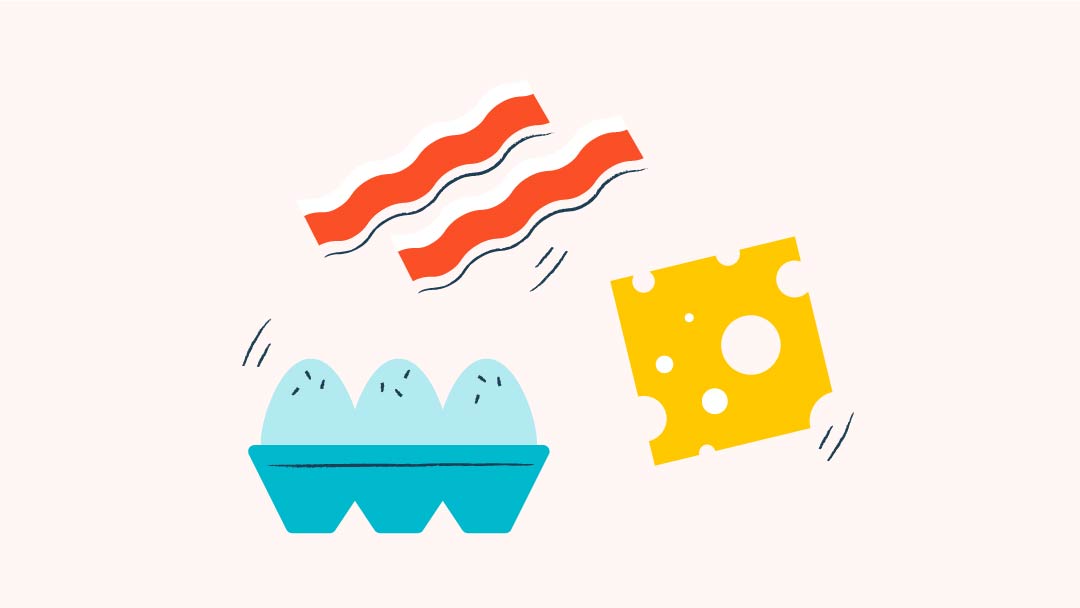 Saturated fat is a controversial topic. The current mainstream view is that saturated fat increases your risk of heart disease. This is reflected in the national guidelines to reduce your dietary intake of saturated fat.

As with most dietary policies, everyone assumes that there is rigorous evidence to back up the claims. This guide will examine the evidence and explain why the science behind the claim that saturated fat increases your risk of heart disease is weak.

The logic behind blaming saturated fat

The reason why so many people believe saturated fat increases the risk of heart disease is because of the following two assumptions:

If ‘bad’ LDL cholesterol causes heart disease, and saturated fat in the diet increases LDL levels, then it logically follows that:

The two steps to this conclusion are widely accepted by many expert bodies. However, the problem with having multiple steps to reach a conclusion is that we need to be 100% certain that both assumptions are true and that (1) causes (2), rather than there simply being an association between dietary saturated fat and heart disease.

For the two steps of the widely accepted heart disease theory to be true, there would need to be strong evidence that saturated fat intake directly increases the risk of heart disease. That is the focus of this guide because, at Second Nature, we don’t believe the evidence is strong enough.

How did dietary cholesterol get into the equation?

The human body is incredibly complex and difficult to study. Despite recent advances in science, exactly how the body works at a cellular level still remains a mystery. Often, we come to a conclusion (such as ‘saturated fat is bad for us’) through an educated ‘guess’, rather than solid physiological knowledge or understanding. These ‘guesses’ are then either supported or contradicted by evidence as science and research progress.

The idea that higher cholesterol levels caused heart disease was driven by Ancel Keys in the late 1940s. At this point, no one knew LDL (‘bad’ cholesterol) existed, so Keys was referring to total cholesterol. He became interested in the topic when he noticed that, surprisingly, American business executives, presumably among the best-fed people in the world, had high rates of heart disease.

Keys made an educated guess and proposed a link between blood cholesterol levels and heart disease.

To support his theory, he studied the population of Naples, which had the highest concentration of people in the world living past the age of 100. Keys suggested that a Mediterranean-style diet that was low in animal fat protected against heart disease, and conversely, that a diet high in animal fat led to the condition.

As a result, representatives of the American Heart Association appeared on television in 1956 to inform people that a diet high in butter, lard, eggs, and beef would lead to heart disease.

This is where the low-fat and low animal-fat messaging first originated, and it resulted in the American government officially recommending that people adopt a low-fat diet to prevent heart disease. This advice followed suit internationally.

Changes to the equation

Keys’ heart disease equation started with the theory that dietary cholesterol (e.g. from eggs) would affect blood cholesterol levels. This was soon discarded after an experiment where Keys fed eggs to volunteers (eggs contain more cholesterol than any other food) and found that their cholesterol level did not change.

It’s now widely accepted that cholesterol in the diet has no significant impact on blood cholesterol levels. In 1997 Keys wrote this:

More recently, the fact that cholesterol in the diet has no impact on blood cholesterol levels or heart disease was reaffirmed. In 2015, the Dietary Guidelines Advisory Committee in the USA, having reviewed all the evidence made this statement:

‘Cholesterol is not considered a nutrient of concern for overconsumption.’

So overconsuming cholesterol isn’t something we need to worry about in relation to heart disease, but what about saturated fat?

The link between saturated fat and heart disease

We discussed how Keys had demonstrated that blood cholesterol levels were strongly related to heart disease from his Seven Countries Study. However, what people didn’t know at the time, and has since been shown, is that the 7 countries chosen for Keys’ study were handpicked in advance as they were more likely to align with the cholesterol and heart disease theory. Other countries that might conflict with that hypothesis, such as France, had been left out.

So cracks begin to show in the theory that saturated fat causes heart disease, as the evidence was distorted.

Since then, multiple large-scale analyses (called ‘meta-analyses’) have been conducted on large populations that have been followed carefully for decades, examining what they eat and what they die of. All show no consistent association between dietary saturated fat intake and risk for heart disease or death from all causes.

In fact, some of these studies show the opposite; an inverse association of dietary saturated fat intake and heart disease.

A number of these studies also suggest that the risk of heart disease increases when dietary saturated fat is reduced and replaced by carbohydrate.

Looking at the rates of heart disease in countries that weren’t handpicked for Keys’ study can shed light on the saturated fat debate. 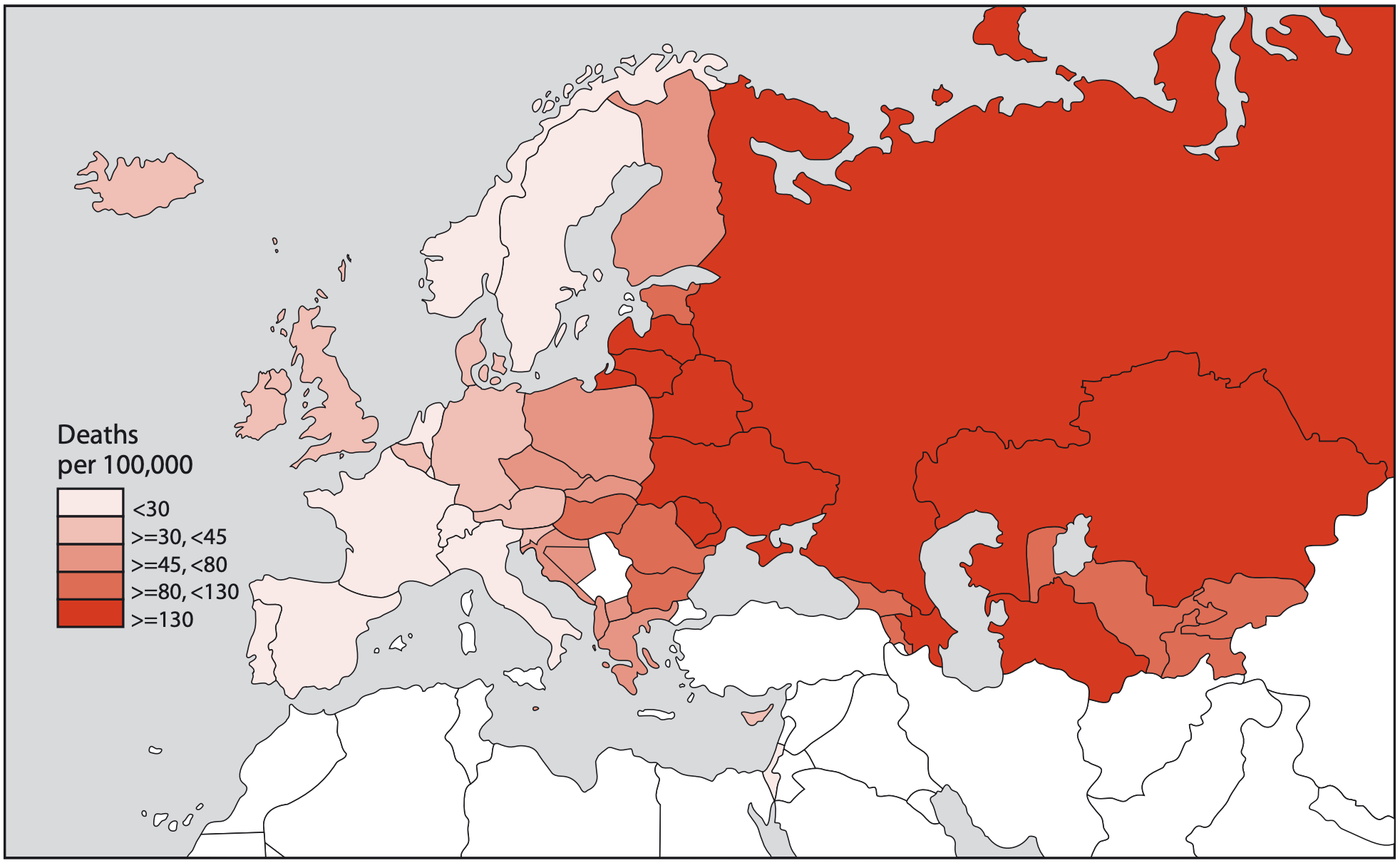 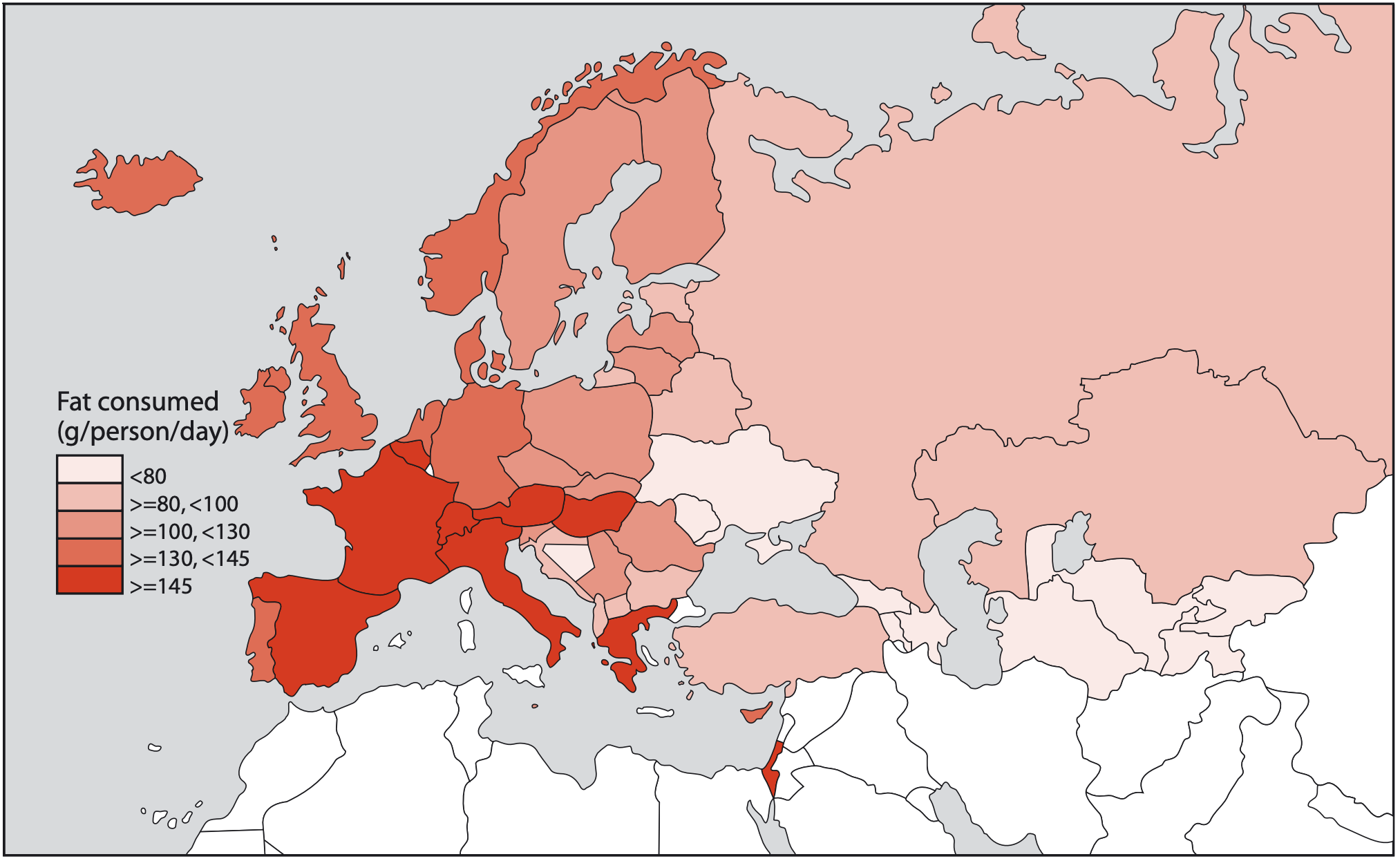 As you can see in picture 1), deaths from heart disease show a clear gradient from light red to dark red as you go from west to east (Russia having the highest rates). Picture 2) shows the exact opposite trend; higher fat consumption in the west and decreasing to the east.

The same publication also provided data on the saturated fat intake of different countries and the corresponding heart disease deaths:

So, we might question why the British Heart Foundation hasn’t reconsidered its recommendations around saturated fat intake, despite publishing this data. A potential answer is that the report is 188 pages long and the picture and data tables were found at opposite ends of the report.

The widely accepted view that cholesterol levels are linked to heart disease is based on the assumptions:

However, as this guide has shown, the evidence for the third claim is weak. Not only do recent large meta-analyses show that there is no association between saturated fat intake and heart disease, but there is also plenty of data showing the opposite trend.

Comparing the amount of fat that comes off an organic free range chicken and a intensively reared one, I would still opt for the former. If I do have a cheaper chicken I drain off the fat as I can’t help feeling this type of fat is a) too much and b) not the right type of fat to consume.