How Does Alcohol Cause Weight Gain?

You may or may not be surprised to hear that alcohol consumption can have a significant effect on your weight, but not necessarily in the way you might think.

There are several direct and indirect ways that heavy drinking can make you gain weight or, more specifically, gain body fat.

When people discuss alcohol’s effect on weight, they typically refer to the calories in alcohol as the leading cause of weight gain.

These numbers are significant; alcohol provides 7 calories per gram. Therefore, alcohol consumption within the government guidelines of up to 14 units per week for both men and women can provide almost 3,000 extra calories per week if choosing the highest calorie option. For heavy drinkers, this number is significantly higher.

That can be over a day’s worth of energy needs just from the alcohol. Plus, most alcoholic beverages have a lot of energy but little nutritional value, which is where the term ‘empty calories’ comes from.

However, increased energy intake from alcoholic beverages is not the main reason that excessive alcohol results in weight gain. What’s more interesting is the number of ways excessive alcohol affects your weight indirectly.

Alcohol has a ‘tipping point’. This refers to the amount of alcohol it takes for your inhibitions to be significantly lowered such that your energy intake substantially increases over the following 48 hours.

A recent research survey reported that the average tipping point, the point at which people go on to make poor choices with food and alcohol, is 9.3 units of alcohol. This is equivalent to only 3.7 pints of beer or 3.1 large glasses of wine. 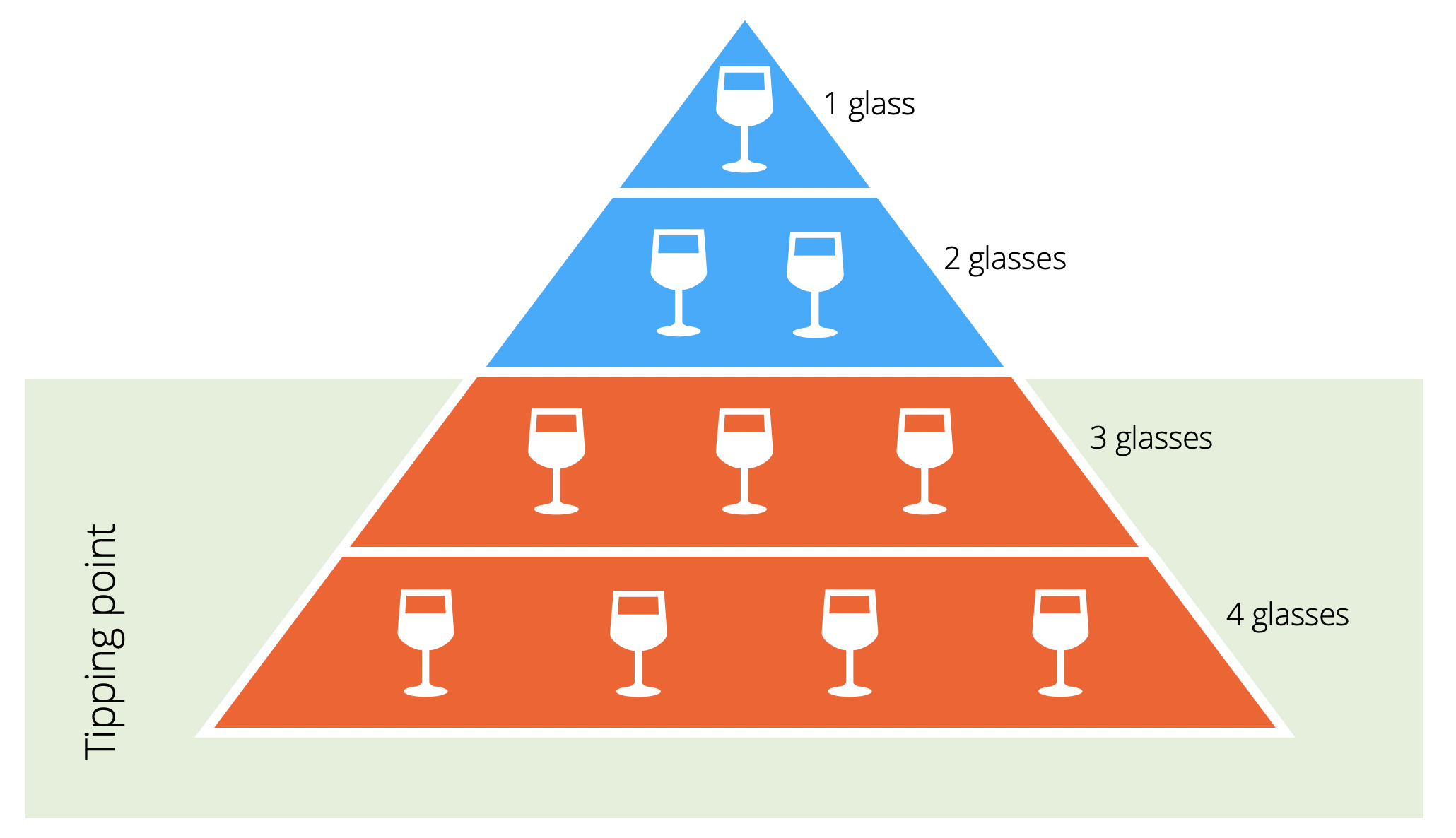 The average additional energy intake after a person has passed their tipping point is estimated to be 4,305 extra calories that same evening – more than twice the recommended daily calorie guideline for an adult woman.

The survey also highlighted that the day after passing their tipping point, 50% of people cancel planned physical activity, which is often replaced with sedentary activities such as watching TV or staying in bed.

People continue to make poor food choices the day after passing their tipping point, with an average estimated additional intake of 2,051 calories; taking the estimated total additional calorie intake to over 6,000 in two days.

Let’s just let that settle in; having 3-4 pints of beer or 3 large glasses of wine can indirectly increase your calorie intake by over 6,000 calories in the following two days!

Most of us are probably aware that we prefer stodgy foods after drinking and are less inclined to be active the next day, but when the numbers are added up, it can be quite shocking.

As well as the result of passing your tipping point, research shows that poor quality of sleep following binge drinking has a significant effect on weight.

Drinking alcohol close to bedtime is initially a sleep aid; this is where the idea of ‘a drink before bed’ came from. However, alcohol impacts the critical stages of your sleep, such as deep and REM sleep.

While you might initially fall into deep sleep more easily, you then wake up frequently during the night and have poorer deep sleep overall. Also, you also experience less REM sleep, meaning you can wake up feeling exhausted.

Additionally, alcohol is a diuretic, meaning you lose more body water, so you’ll likely need to go to the bathroom more frequently and will often sweat more too.

A lack of sleep, or poor quality of sleep, increases your appetite and cravings for junk food and decreases your energy expenditure on the following day.

Do you need to give up alcohol to lose weight?

The simple answer: no.

Eliminating alcohol is not necessary to lead a healthy lifestyle. It is perfectly fine to enjoy a glass of red wine with a meal, for example. The problem arises when people binge drink, i.e. having 3-4+ glasses of wine or pints of beer at once.

It is important to be aware of both the direct and indirect effects of alcohol on your weight. If you’re determined to improve your health and lose some weight, one of the most effective things you can do is cut out binge drinking. Just by doing this, you could inadvertently lose weight (if you have weight to lose) without making any other changes to your lifestyle.

This is a very interesting article all I have to do is limit myself to 2 drinks on Saturday and I will be ok. Buying the single glass bottle of wine is easiest for me until I reset my mind to only have this amount.