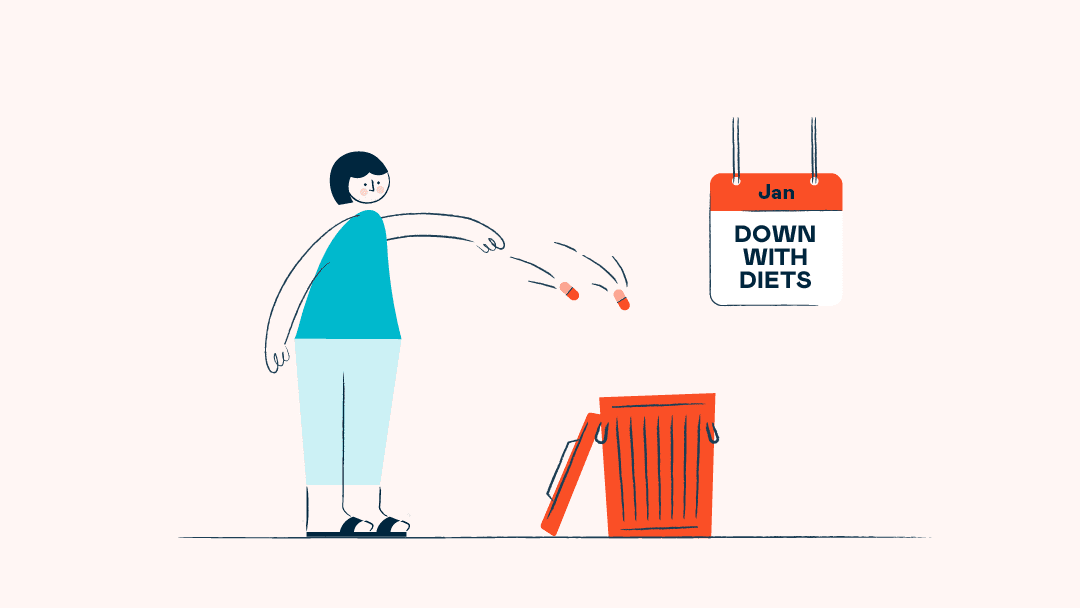 Every year, after indulging on food and drink over the festive period, January comes around and we prepare to commit to ‘new year, new me’. As we’re surrounded by media stories of unrealistic health achievements, it’s very common to set ourselves unrealistic goals. Online searches for ‘juice diets’ or ‘cabbage soup diet’ skyrocket as we desperately look for a quick fix for weight loss or to improve our health.

This year, all of us at Second Nature are taking a stand against unhealthy, unrealistic fad diets. As nutrition experts, we know that they don’t last in the long term. There’s nothing wrong with losing weight, if you have weight to lose. However, there is something wrong with the weight loss industry and how short-term solutions are consistently promoted by unqualified sources.

For many of us, these goals are around dieting, exercise, or some sort of healthy lifestyle change. There’s nothing wrong with wanting to make healthy changes. The issue is when we make unrealistic goals, inevitably fail to achieve those goals, and then feel as though we aren’t good enough or we’ve ‘failed’.

At Second Nature, we know that failing to achieve these goals isn’t simply due to a lack of willpower. Instead, it’s that the wrong goals are being sold to us again and again. This is the reason why most people quit their New Year’s resolutions after just a few weeks. It’s the same reason why people on average, try and fail 55 diets in their lifetime.

We’ve started this movement with a letter, to anyone planning to start the new year with a fad diet. It asks people to stop opting for solutions that don’t work and advice that isn’t legitimate. Instead, there are sustainable changes you can make to improve your health and lose weight in the long term. We’ve written 55 of them, which you can find at: https://www.stopfaddiets.com/.

You might have seen it published in certain magazines, like Good Housekeeping, Cosmo, and Platinum. The letter has been written and signed by experts, including doctors, registered nutritionists and dietitians, and health organisations.

What are fad diets?

There’s a difference between making healthy, sustainable changes to our lifestyle and going on a fad diet. Fad diets often gain popularity for a certain amount of time and then lose traction once a new one gets attention. Common themes include:

Fad diets often promise unrealistic weight loss results and focus on the short-term, rather than the long-term impact on our mental and physical health. Some examples include the cabbage soup diet, diet pills, and juice diets.

Why are they so popular?

It’s natural human psychology to seek out the fastest route to achieving our goals, whether that’s to lose some weight or get a promotion at work. With constant exposure to unrealistic ideals of body size and shape in the media, the pressure to look a certain way can be overwhelming.

For many of us, this can lead to a cycle of yoyo-dieting, where we try various fad diets, potentially see some initial results, before slowly returning to our normal habits because fad diets are notoriously difficult to keep up, and eventually regain any weight that was lost (if not more).

There’s also a comfort in being given set rules to stick to, whether that’s eating a certain amount of calories or only particular foods. It’s common for us to think that following these rules increases our ‘willpower’.

The reason why the start of a new year is such a motivating time to make a change might be explained by what psychologists have coined as ‘The Fresh Start Effect’.

According to the fresh start effect, we’re much more likely to take action towards achieving our goals after a significant temporal landmark that signals a new beginning. This could be starting a new job, getting a divorce, or even moving house. The start of an entirely new year is arguably one of the freshest starts we can have.

The reason why we’re more likely to take action towards our goals at these landmarks in time could be because we’re forced to self-reflect more than we would usually. This behaviour can often motivate us to set goals.

Psychologists studying this effect note that we tend to see our past self separately from our present self, which means at certain points in time we might feel more confident in moving forward without past failings weighing us down.

Why fad diets aren’t the answer

As we mentioned, there’s nothing wrong with wanting to improve your health or lose weight, if you have weight to lose. The issue is that there are so many solutions offered to us that are based on fads rather than facts.

Fad diets promise fast results and focus on restriction, limiting what, how, or when we eat. Here are some reasons why we feel strongly that fad diets aren’t the way forward.

It’s not that fad diets won’t help you lose weight – they will. The problem is that you’re likely to regain any weight that you lose and then some. In fact, research shows two-thirds of people regain all the weight they lost and then some following a strict diet.

Many fad diets aren’t sustainable in the long term, which means when you stop them and return to normal eating habits, any weight lost is likely to return.

Negative effect on our mental wellbeing

Losing weight and then regaining it can be incredibly demotivating. For those of us who end up being in a cycle of yo-yo dieting, this happens over and over again (an average of 55 times across our life as we mentioned!). We’re made to feel as though we ‘failed’ or didn’t try hard enough, when in fact we simply trusted a solution that science says can never work in the long-term.

Although sometimes strict rules to follow can be helpful, they can also have a negative impact on our relationship with food. When we start labelling foods as ‘good’, ‘bad,’ ‘sin’, ‘treat’, ‘clean’, ‘dirty’, we attach moral value to food unnecessarily. Then, when we eat something we deem ‘bad’, it can lead to a cycle of guilt where we form an unhealthy relationship with food. Not only does this have a negative impact on our mental health, but it can reduce the chances of us achieving our goals, as we view ‘slip ups’ differently.

Overall, the evidence suggests that yo-yo dieting, where we lose weight, regain weight, and lose weight again, doesn’t cause long-term problems to our metabolism.

However, when we lose a lot of weight quickly, our bodies can respond by slowing down our RMR (resting metabolic rate). RMR is the rate at which we use energy when our body is resting. When we heavily restrict our food intake (energy in), our body responds by decreasing how much energy we’re using up (energy out) to prevent extra energy being burned.

This response can often leave us feeling incredibly hungry. This means that it’s common to start a restrictive diet, lose weight, return to our old habits, and end up eating more to satisfy our increased hunger.

The goal of weight loss is to reduce body fat while maintaining muscle levels. This is achieved by consuming a portion of protein at main meals and doing a variety of resistance exercises.

In the same way that we’d trust a lawyer for legal advice or an electrician to fix our electrics, it’s best to trust qualified health professionals for weight loss advice. That means looking to doctors, dietitians or registered nutritionists for advice, rather than celebrities, friends, or the internet.

Although there may be variation in the specific dietary recommendations, the overall consensus from all health professionals, is that fad diets don’t work. Instead, the best ‘diet’ is one that you can stick to in the long term, even if that means slower weight loss over a longer period of time.

So, what’s the alternative?

We recognise that telling people not to diet in January is unhelpful without providing an alternative solution for making healthy changes. At Second Nature, we know that there’s much more to weight loss than what we eat.

Small behaviours all add up to influence our weight over a long period of time. These behaviours can be anything from how much sleep we’re getting or how we’re coping with stress, to whether we plan our meals or how we view physical activity. That’s why we’ve provided free resources with 55 things you can commit to at the start of this year instead of a fad diet, here at:

The 12-week Second Nature programme focuses on an individual’s health first, where weight loss is a natural consequence. We educate people around all aspects of health, including nutrition, exercise, stress, and sleep. We recognise that mental wellbeing is just as key for weight loss as physical wellbeing. Plus, the programme is built by experts, registered dietitians and nutritionists, and backed by the NHS.

Most importantly, should you want to join a programme, we’ll be here all year round, not just in January!

Hi Carol, thanks for your comment! You can find out more by taking our health quiz here

hope this works for me