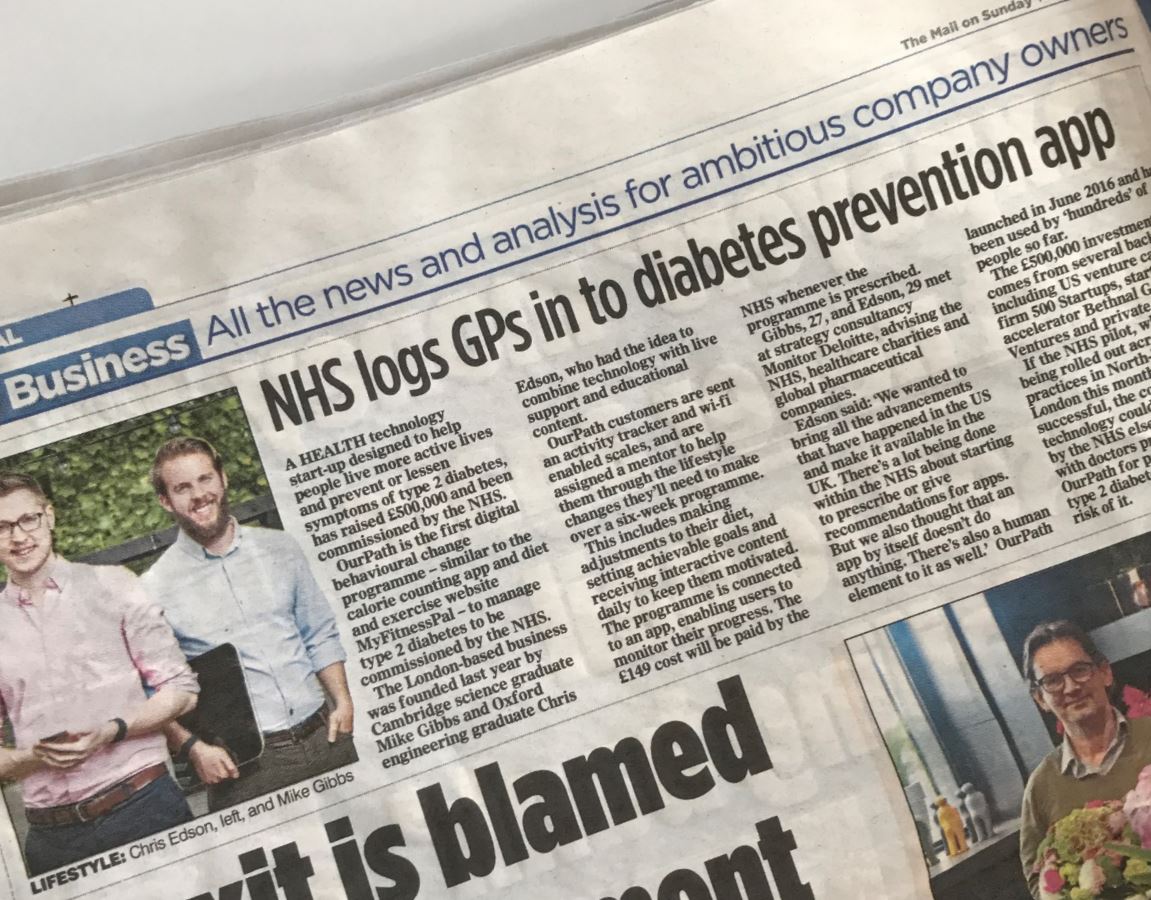 We’re very excited to have been featured by Vicki Owens in her ‘This is Money’ column in the Mail on Sunday. Being written about in the national press is always nice, but this is particularly special in the light of our first NHS contract and closing our seed funding round.

We’ve raised £500,000 from a mix of VCs and Angel investors, including the likes of 500 Startups — the American venture capital firm — and Bethnal Green Ventures, an accelerator for start-ups with a social purpose. Our mission is to continue pushing the boundaries of digital healthcare by taking some of the load off the NHS  — specifically by trying to tackle the crippling diabetes crisis.

A lot of research has been done on what makes an effective lifestyle intervention for people at risk of type 2 diabetes. This has mostly been through in-person programmes however, such as the National Diabetes Prevention Programme. While such programmes are very effective, combining community, education and support, they come with certain disadvantages — requiring people to meet every week in a certain location, for instance, and leaving them to their own devices the rest of the time. The NHS itself recognises this, having committed to exploring digital solutions through the Digital Diabetes Prevention programme.

A digital intervention would solve many of these pitfalls, allowing people to fit lifestyle change around their lives, and receive professional support round the clock for example — elements which simply aren’t possible to replicate for in-person programmes at scale.

Digital diabetes prevention has been trialled extensively in the US, with companies such as Omada Health and Retrofit offering very successful diabetes prevention programmes online. We want to bring that innovation to the UK, where there are over 4 million people living with type 2 diabetes — and 5 million more at risk of developing it. Type 2 diabetes costs the NHS £9bn a year — and it’s almost 100% preventable.

Our first NHS contract, rolling out the programme to people at risk of type 2 diabetes in North West London is a significant milestone for us — we’re the first ever digital behavioural change programme to be commissioned for the management of type 2 diabetes. We hope it will pave the way for further NHS collaboration, ultimately easing the strain on public services — not to mention changing millions of people’s lives.